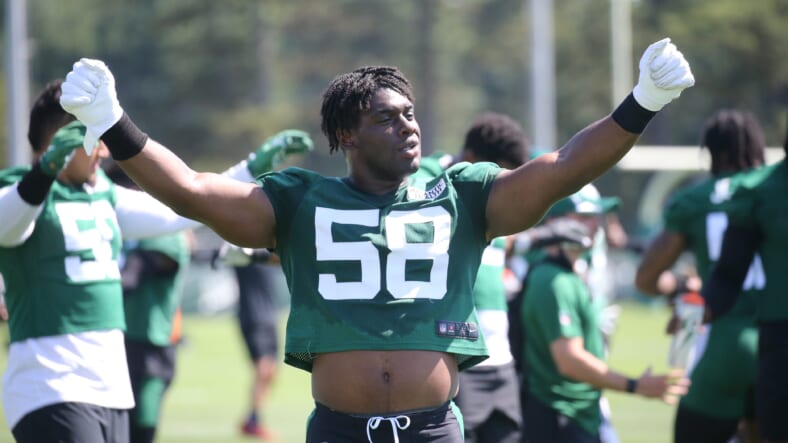 For the New York Jets to improve in 2022, simply put, the defense has got to play a whole lot better than it did a year ago.

In 2021, the Jets’ defense ranked last in football, allowing 397.6 yards per game. They had two stretches of at least three consecutive games throughout the season, allowing 30 or more points a game.

Now, Robert Saleh and Jeff Ulbrich are in year two of leading this unit. Joe Douglas invested a good amount into this side of the ball for them, providing way more talent to work with. By the end of the year, Saleh and Ulbrich should have this defense improve substantially in the final rankings.

The Jets’ edge position going into 2022 is one exciting group. They have potential high-end starters who were premium investments. Douglas and Saleh have also built very strong depth. This group is loaded with a ton of pass rushers who offer different sizes.

The headliners are, of course, Carl Lawson and Jermaine Johnson. Also, anticipate John Franklin-Myers to still play defensive end on early down to help the run defense. The depth consists of a few speed rushers built lower to the ground in Jacob Martin and Bryce Huff. Lastly, exciting rookie Micheal Clemons offers some size and power to this group rushing the passer.

Starting with Lawson, it will be great to finally see him live for the Jets. He is a gifted pass rusher who knows how to rush with a plan, has sound technique, and has a variety of moves he can win with. Lawson offers speed and the ability to convert to power. He has the chance to provide the Jets with some of the best edge pass-rushing production in quite some time.

The rookie first-round pick, Johnson, will immediately help against the run. He offers more size and physicality compared to most of this group. Still, Johnson has speed, athleticism, and can convert to power. In year one, expect Johnson to give the Jets some timely, impact pressures and sacks.

Martin and Huff will offer great depth as rotational speed rushers. With Clemons, he could be deployed inside at times. His motor and arsenal of moves give him the chance to help as a first-year player. This depth is comforting.

This is yet another group along the defensive front filled with pass-rushing talent. It starts with Quinnen Williams, who should have a dominant breakout year. As mentioned above, Franklin-Myers will get chances to rush inside in passing situations this year, similar to his usage in 2020. Former first-round picks Solomon Thomas and Sheldon Rankins will be counted on to help create pressure. The group here rounds out with fifth-year Jet, Nathan Shepherd.

Franklin-Myers is the versatile player along this defensive line for the Jets. This year, against the pass, Franklin-Myers should be a force as an interior rusher. He has the combination of size and quickness, making him a mismatch for guards. Franklin-Myers is an underrated key player to this front.

Thomas seems slated to have a significant role on early downs. He is coming off a career year and has experience with Saleh. Rankins will likely have a rotational pass rush role and needs to play better than he did a year ago. Shepherd adds some size to this group as a backup. His role will likely be limited to helping defend the run.

One of the more unknown positions across the Jets roster. No significant investments were made at linebacker this offseason. Respected veteran C.J. Mosley will lead this group. The biggest addition that was made, Kwon Alexander, should have a pivotal role. This season is a big one for Quincy Williams to prove himself. Jamien Sherwood is the primary backup. This group rounds out with Marcell Harris, who will likely be utilized on special teams.

Beginning with Mosley, he is a core leader of this football team. His smarts, pedigree, and winning experience all make him valuable. Mosley had a solid 2021 but has to make more impact plays this year. He should provide reliability to this run defense with his size and physicality. Big plays will be needed against the pass, whether it be in coverage or rushing the quarterback. Mosley should be a top asset to this defense.

The summer addition in Alexander will have a key role in this group. He brings speed, energy, and experience to the defense. Alexander has familiarity with Saleh. His toughness and physicality in the box will be needed. He should make his impact felt as a pass rusher. Ultimately, Alexander should be the second linebacker alongside Mosley at some point this year.

Williams is a young player with all of the speed and athletic tools one could ask for. He is a high-effort, physical football player to boot. The key with Williams is to show a clear improvement in consistency and not allow big plays. Playing with more control in pursuit will be vital. Williams has the talent, and it will be fascinating to see if he improves in 2022.

In year two, hopefully, Sherwood progresses. He has the size and power in the box to contribute against the run, where the Jets have some unknowns. Sherwood is a smart, young player who showed some encouraging things this preseason.

The group here is completed with Harris, who will probably play for Brant Boyer on special teams.

Along with tight end, the Jets vastly upgraded at cornerback this offseason. Sauce Gardner and DJ Reed give the Jets quite the duo on the outside. Michael Carter II is now in his second year starting in the slot. The depth here comes from Bryce Hall, Brandin Echols, and top special-teamer Justin Hardee.

The Jets’ thrilling top draft pick will be counted out tremendously right away. Gardner has noteworthy height, length, and physicality in press coverage tight at the line of scrimmage. To go along with his physical attributes, Gardner has speed and quickness athletically. Gardner is ultra-competitive and hard-working with a terrific pedigree. In year one, Gardner will give the Jets’ defense many big plays.

In free agency, Reed was one of the Jets’ big signings. He has experience with Saleh, like a few others in this defense. Reed is coming off a career year in which he excelled. At the right corner position, anticipate some splash plays from the Jets’ new defensive back. Reed should only build on his best year with the Jets.

Carter II might be the Jets’ most underrated player going into 2022. He could be one of the bigger breakout players on the team. The key for him to do so will be creating more turnovers and overall ball production in coverage. Carter has speed, toughness, and intelligence, playing a complex position as the slot cornerback. With Gardner and Reed now outside, it should only help Carter in his early development.

Hall and Echols are two young corners with experience and some complementary skills. With Hall, the top backup cornerback, are tons of physical attributes. He has it all from being big, tall, and long. He played well last year and presents viable depth. Echols is built lower to the ground but much faster and has some playmaking capability on the football. He is a great fifth corner to have. As stated, Hardee will lead the special teams unit yet again with his effort and competitiveness. He is a respected and emotional team leader.

The Jets made one sizable move at safety this offseason with the signing of strong safety Jordan Whitehead. Alongside him, Lamarcus Joyner is slated to start at free safety. The depth comes from undrafted rookie Tony Adams and third-year safety, Ashtyn Davis, who may have a role on special teams.

Whitehead will bring a great, needed presence to the Jets’ defense. He is a tough and physical football player. In the box, Whitehead will make an impact on this defense. Whether it be stopping the run, pressuring the quarterback, or in zone coverage, Whitehead can contribute. Whitehead is a young 25-year-old player entering his prime. In his first year with the Jets, Whitehead should give big production.

The older veteran of this group is Joyner. He offers versatility to go along with his experience. Joyner plays with great effort and, with his prior corner experience, can help the Jets in coverage. Hopefully, Joyner can just provide the Jets with some reliability on the backend.

Davis and Adams are two young athletes. Davis has height and speed. Hopefully, he develops on defense while giving some contributions to special teams. Adams is an intriguing undrafted rookie who earned a roster spot. His athleticism is highlighted by his explosiveness. He is a former corner who can give the Jets value in coverage. Adams is fast and physical. He has adequate size and past ball production. How he progresses as a rookie will be worth monitoring.

The strengths for the Jets on defense are the pass-rushing talent on the defensive line, the cornerback trio, with established players up the middle in Mosley and Whitehead.

There is a clear upgrade in talent for Saleh and Ulbrich to work with and ultimately improve this defense in 2022.

The few main concerns are stopping the run with a run-stuffing nose tackle and linebacker. Lastly, at free safety, the Jets have unproven commodities.

However, this unit is much better and should be a competitive one throughout this year. Ideally, the Jets should be a top 20 defense by the end of 2022.