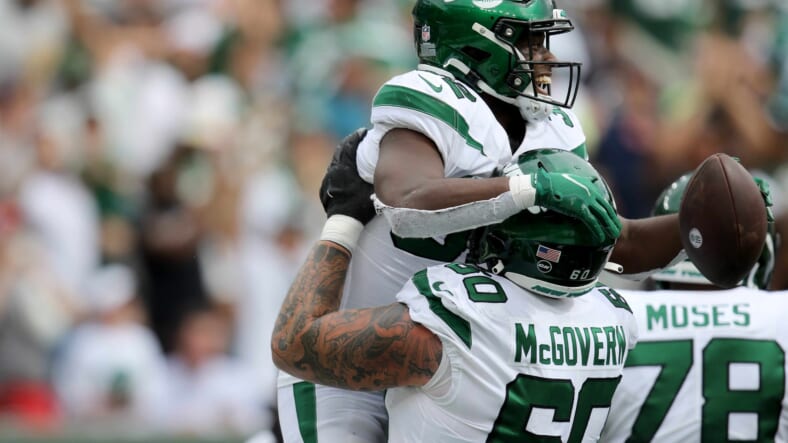 With the electrifying 2022 draft class for the New York Jets set to report for training camp tomorrow, we will start to take a look at how this final 53-man roster could look come Week 1. Joe Douglas has done a stellar job of building this team up. There is some quality competition set to take place this summer throughout camp and the preseason at multiple positions.

While reviewing the roster, there were over 60 players in total who have a chance of making the team. In terms of essential locks to be on the roster, there were about 40 players. That leads to about a dozen spots up for grabs amongst roughly 20 players. There were some tough calls to be made here, and final roster cuts later this summer will be fascinating. Let’s get into this first final 53-man roster projection for the 2022 Jets.

The chances seem strong that the Jets will carry all three quarterbacks. With the structure of the contract Joe Flacco signed this offseason, he is set to be a Jet this year. It will be intriguing to see how Mike White performs this summer.

It is tough to not keep a fourth running back between strong options in Ty Johnson, Zonovan Knight, and La’Mical Perine, but the spots available were limited. One could very well be retained on the practice squad.

The Jets seem to like Nick Bawden. The offense Mike LaFleur designs needs a true fullback which Bawden provides. He is a tough, physical, and willing blocker. Bawden can also contribute on special teams for Brant Boyer.

One of the more straightforward position groups for the Jets entering camp. After these six, there is not a proven player. Denzel Mims will once again be one of the more closely followed Jets players.

The Jets fully revamped tight end group looks good on paper and should make a difference this year. Fourth-year Jet Trevon Wesco was one of the tougher players to leave off. Young receiving tight ends, Kenny Yeboah and Lawrence Cager could be kept on the practice squad.

Douglas has done an incredible job of building up this group. The five interior players make for a strong group. Only keeping three tackles was one of the tougher decisions. Conor McDermott and Chuma Edoga will need to have productive summers with limited roster spots.

All six of the Jets’ top edge defenders make the cut. This group is filled with pass-rushing potential. How Robert Saleh and Jeff Ulbrich are able to get the most out of each of these players will be fascinating to watch.

The Jets end up going into the season with 11 defensive linemen. The main battle to monitor here will be between Nathan Shepherd and Jonathan Marshall. Shepherd seems to be a fan favorite of the front office and coaching staff as one of the team’s longer-tenured players now. If they go with Shepherd, anticipate the Jets trying to get Marshall back on the practice squad.

The way this group rounds out after C.J. Mosley, Quincy Williams, and Jamien Sherwood is difficult to project. Leaving Marcell Harris off here was a tough call. The decision to go with Del’Shawn Phillips was based on the fact that he proved himself as a top special teams contributor for Boyer last year.

One of the Jets’ position groups loaded with depth. Second-year player Isaiah Dunn should be reserved on the practice squad. Justin Hardee will remain a core special teamer. Javelin Guidry has proven himself well as an undrafted free agent throughout his first two years and is a capable backup in the slot to Michael Carter II.

With tons of depth in place on the defensive line and at cornerback all on the final 53, there is only room for three safeties here. Young players Ashtyn Davis and Elijah Riley are viable practice squad options who were hard to leave off the roster.

Braden Mann and Thomas Hennessy are locked in. The kicking competition between Greg Zuerlein and Eddy Pineiro will be an important one. As of now, the more proven and accomplished veteran in Zuerlein sticks.