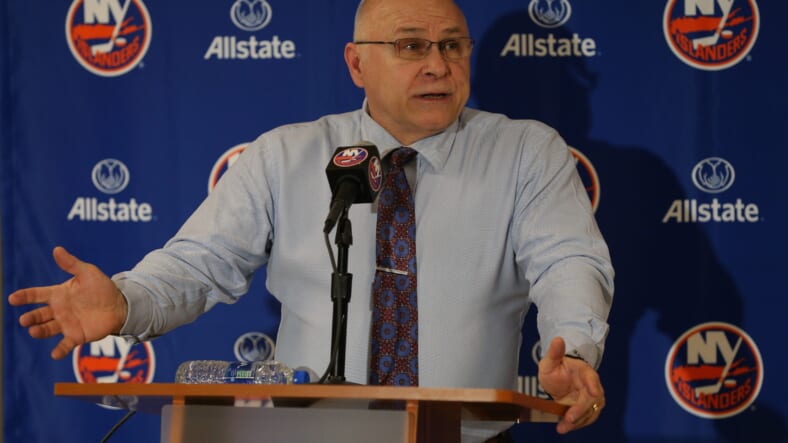 New York Islanders‘ general manager, Lou Lamoriello has done it again. Lamoriello has settled Ho-Sang’s arbitration and boy did he get a good deal done.

Most times the team is at a disadvantage Â during arbitration hearings. Lamoriello decided to take matters into his own hands and sign him before the hearing.

The Islanders re-signed Josh Ho-Sang to a one year deal worth $700k. Lamoriello signed a diamond in the rough for the league minimum.

This is why Lamoriello is the best general manager in Hockey. He re-signed a possible solid young piece for an insanely cheap amount. As Ho-Sang gets back on board for at least another year, what does this mean for him going forward?

It’s a stipulation that means the players’ contract is dependant on which league he plays in. If Joshua Ho-Sang plays in the AHL this year, he is only owed $250k.

The Islanders have major cap space issues, and Ho-Sang almost caused a riot if he got to his court hearing date. Arbitration hearings are what got Devon Toews traded, one can only imagine what Lamoriello would’ve done if he couldn’t reach a deal before this date. Joshua Ho-Sang will play all of this year in the AHL, and then the Islanders will have to reevaluate him.

Who Are They Resigning?

This version of Ho-Sang must be the best version of Ho-Sang. Lou Lamoriello has already stated what he thinks of him, and it’s not too positive. Ho-Sang is a bust, and there’s no way around that. He had that one exciting year in 2016, but never improved on it. Ho-Sang always had silky mitts and a great offensive mind, but he doesn’t fit this system. He almost never backchecked let alone forechecked.

This is why he’ll never make the Islanders, he doesn’t play defense. Although there may be a lot of negatives in his play, it is worth a shot to sign him to a minimum deal and see him maybe breakout. The Islanders did a great job developing some of their younger players as of late, it’s worth a shot to see how Ho-Sang turns out.