New York Islanders: Ilya Sorokinâ€™s first win was exactly how it needed to be 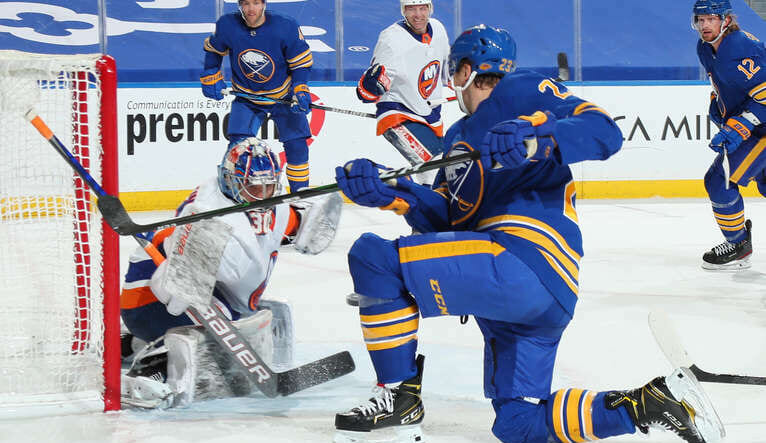 There were a lot of ways to imagine howÂ IslandersÂ stud rookie goalie Ilya Sorokin would secure his first win. Some probably thought it would have come in his first NHL game last month against the Rangers, only for it to become a nightmare after the 25-year-old was given 20 minutes notice he was starting as a result of Semyon Varlamov taking a shot up high in warmups. Others maybe had it penciled in either of his next two starts in New Jersey and Philadelphia. He was unsuccessful in those attempts as well.

But then last night occurred. And Sorokin finally got his first victory in the National (shoutout Kevin Weekes), a 3-0 decision over the Buffalo Sabres. It was also the first shutout of his NHL career and first win in an Isles uniform.

“He was outstanding,” Barry Trotz said following the win. “The athleticism. He made some huge saves.

Sorokin turned away all 20 Sabres shots and made some dynamite stops throughout the night, including his pair of third period robberies of Viktor Olofsson and Sam Reinhart.

Not only was it the kind of performance everyone had been hoping to see from the newcomer with all the hype thatâ€™s been around him since his arrival, but it was the exact type of game Sorokin needed to win. Heâ€™d played well enough to win in his previous two outings, but last nightâ€™s triumph he worked every second for. Especially in the first and third period, Sorokin stood tall and showed off his incredible flexibility.

“I think it will [be a weight off his shoulders],” said Trotz.

Oh it was as Sorokin pointed out himself in the postgame.

“I feel good. It’s good for me that I got my first win,â€ he told the media.

Now with his first win under his belt, Sorokinâ€™s confidence should be boosted. The fact the Isles gave him the support he needed at both ends of the ice too â€” last night was the first time Sorokin was given a lead this season â€” could give him reassurance he is not going to have to stand on his head every time he gets the call.Â But his individual showing last night was a statement.

Sorokin said after the win that the video review would be what he remembers most about the whole night, which is funny. Funny becauseÂ what those who watched it will remember is that his win came in the fashion it was supposed to be.

Where he was locked in from the moment the puck dropped.

There might not be an Islander more on fire right now than J.G. Pageau. As I wrote about yesterday, his recent string of performances have been a nice jolt for the Isles during what is now an eight-game point streak.

So whatâ€™s been behind his success? Pageauâ€™s answer might be better than his play: â€œBeing a pain in the ass.â€

Outstanding response. Just another example of why Islanders fans love him on this squad.

The Islanders continue to keep making history it seems.

One night after allowing zero shots in a period for the first time in franchise history, they recorded their fourth shutout of this season.

It was their fourth goose egg in the first 15 games of the year, marking the first time the team has ever accomplished done that in its 49 years of existence.