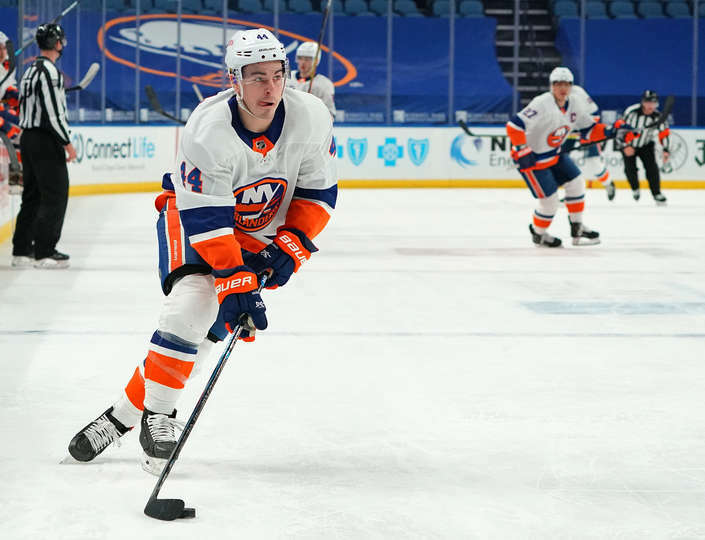 If you’ve watched the Islanders of late, there have been a number of things that have contributed to their strong play. They’re getting big performances from up and down the lineup, including third-line center J.G. Pageau.

Last night’s sound 3-1 victory over the Buffalo Sabres made it seven straight games with a point for Barry Trotz’s crew. And it was Pageau, whom the Isles saw first hand in the bubble postseason just how effective he can be when his game is on, who extended his goal-scoring streak to three games. His snipejob over Sabres’ netminder Linus Ullmark off the rush showed his confidence looks restored after a soft start to the season.

“I think he’s playing with a little bit of edge to him, Trotz said in the post game. “He has that edge back… He has that game rolling. He’s a very important player for any coach in this league, I’m just telling you… You can slot him anywhere… he finds a way to get it done for you so he’s very important with our bench.”

Make it 3️⃣ straight games with a goal for JG. #Isles

The last three games Pageau is proving Trotz’s theory right. His four points over this recent stretch — all at crucial junctures of each game — leave him with eight points in 14 games and have catapulted him up to third on the team in goals and overall points. Those numbers come down to Pageau showing consistency, which was one of the major things expected of the 28-year-old coming into his first full season with the Isles.

That was his MO when the Islanders dealt for him at last year’s trade deadline from Ottawa.

It wasn’t there early on the first month of this shortened campaign — some of that due to the revolving door of wingers on Pageau’s line — but he’s found it, even if it’s taken a little bit longer this year than some may like. The fact too his production has come when the Islanders are starting to really find their game is both a boost and can be scary for the opposition.

“Pager is a guy you win with,” Trotz also acknowledged. “He gets it done when it matters most.”

With how the Islanders are playing, seeing Pageau continue to thrive will really put things in full gear as the season goes on.

His recent play indicates that. And it’s leading to what means most…winning.

We’re at a point now where it seems Mathew Barzal basically embarrasses at least one player on the opposition each game now.

I’ve lost track of how many ankles Mathew Barzal has broken this year pic.twitter.com/A2NclZFgNp

Irwin’s busted ankles along with another point for #13 — extending his point streak to nine games — was all in a night’s work.

We’re used to seeing the Isles put on defensive clinics under Barry Trotz’s watch. But what they did last night was astonishing.

Per Eric Hornick, It marked the first time in franchise history they accomplished such a feat.