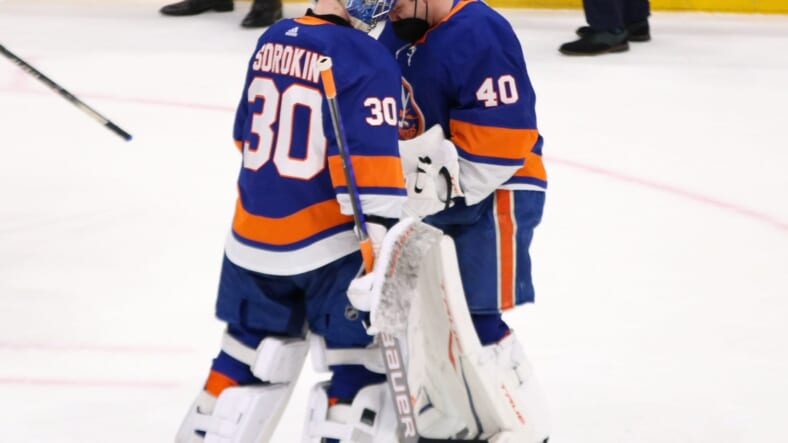 Unless youâ€™ve missed it the past three years, goaltending has become an incredible strength for the Islanders as its pertained to their success. It was their backbone in 2018-19 â€” led by Robin Lehner and Thomas Greiss â€” which resulted in a 103-point season and a second round playoff appearance. Last season, this time with Semyon Varlamov and Greiss at the helm, there were some struggles but it was solid enough to get the Isles into the postseason and eventually propelled them all the way to within two games of the Stanley Cup Finals. And now itâ€™s continued into this year, in a shortened 56-game sprint nonetheless.

Right now, the Isles conceivably have the best goaltending duo in the entire league consisting of Semyon Varlamov and rookie Ilya Sorokin. The proof of that statement was furthered last night after Sorokinâ€™s outstanding performance in the teamâ€™s 2-1 come from behind win in Philadelphia. The victory made it eight straight wins for the the 25-year-old freshman sensation.

“He [Ilya] was our best player,” teammate J.G. Pageau said in the postgame. “I think that’s what gave us the boost. He was able to give us only one goal to come back from in the third, and then I think we really came back in the third as a team.â€

The tandem of Varlamov and Sorokin also have the numbers to back up why their the top billing. The twosome have combined for 21 wins (Varly 13, Sorokin 8), which is the most for any duo in the league. Just to show the disparity of that stat: Tampa Bayâ€™s Andrei Vasilevskiy, who is the reigning Vezina Trophy winner, has tallied the most wins by any goaltender with 20. His backup, Curtis McElhinney, only has three. More so, they have driven the Isles to be fourth-least in goals allowed (73), the best save percentage in the league at .921%, the second-best GAA allowing an impressive 2.12 and have five shutouts combined.

What those numbers proves is power of balance the Isles have now with Varlamov and Sorokin canâ€™t be underestimated.

Beyond as a duo, individually each goalie is thriving. Varlamov is in the midst of one of the best seasons as a pro and has been playing at a Vezina-worthy level. Varly is our number one, no question,” head coach Barry Trotz said earlier this seaaon. “To me when you’ve got a guy like Varly who has been in the league as long as him, people tend to say you’ve got Ilya here, to me you need to have about 100 NHL games. It has to be a bigger sample size before you can say you have a goalie controversy.”

The 32-year-old hasnâ€™t been in that award Â conversation since he was nominated since 2013-14, when he won 41 games and backstopped the Colorado Avalanche to a Central Division title. He should be in those talks again as his game this year has been fantastic and heâ€™s taken his tremendous showing from in the postseason bubble and taken it to another level through this point of the regular season.

Then thereâ€™s his counterpart Sorokin, who is truly living up to all the hype that came with him being dubbed the â€œbest goaltender not playing in North Americaâ€ before he signed back in the summer. How his game has taken shape after a few shaky starts to begin the season shows just how damn good of a goalie he is. Sorokin is sporting an astounding 1.97% GAA after his 36-save performance against Philly, and heâ€™s allowed three or less goals in Â  his last six starts. If not for Washingtonâ€™s Vitek Vanecek and Minnesotaâ€™s Kirill Kaprizov, the case could be made that Sorokin would be leading the Calder Trophy race right now. That could also be said for the other Islandersâ€™ rookie, Oliver Wahlstrom.

The Isles arenâ€™t far removed from when Lehner (who became a Vezina finalist) and Greiss helped win the William H. Jennings Trophy. That duo didnâ€™t get the love it truly deserved as possibly the NHLâ€™s best one-two punch in net. Varlamov and Sorokin have a chance to repeat that feat as such and possibly eclipse those two as the season continues.

As News12â€™s Rob Del Muro pointed out to me last night, with the Islanders still winning and their two goaltenders rolling, the team is set up with the perfect scenario.

Heâ€™s right in the evaluation. And itâ€™s that way because the Isles are showing their goaltending duo is head and shoulders above the rest of the league.