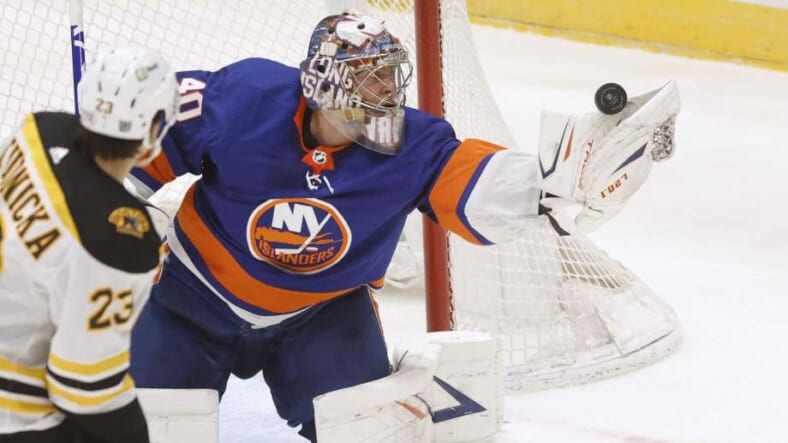 Only one time in his career was Islanders goalie Semyon Varlamov in the conversation for the Vezina Trophy. It was 2013-14 when he was backstopping the Colorado Avalanche, a star-studded cast who were the Central Division champions. Varlamov finished second in the voting behind Bruins goalie Tuukka Rask; Rask earned 103 votes, Varlamov 90.

Since that magical season, the 32-year-old has not even sniffed the best goalie in the league conversation. But his performance during the Islesâ€™ run in the bubble, coupled with his start to this year, could finally change the narrative.

A quarter of the season through Varlamov has been a rock in between the pipes for the Islanders, who are now rolling on an eight-game point streak.

Varlamov has won seven of his 11 starts, which is third among all NHL goalies. His goals-against average is a sparkling 1.89 while his .931 save percentage are both in the top-three in the NHL among netminders who have ten or more games played, according to quanthockey.com. And he is tied with the Ducksâ€™ Jon Gibson for the league-lead in shutouts with three. The Islanders as a team have four shutouts, the latest being rookie Ilya Sorokinâ€™s on Tuesday against Buffalo which also accounted for his first NHL win.

“He’s been pretty incredible all year against all the teams he’s faced honestly,” said teammate Cal Clutterbuck of Varlamov last week. “It seems like he keeps getting better, calm and cool in there. We’re lucky to have him.”

Clutterbuck isn’t far off when acknowledging the Islanders have been fortunate to have the big Russian. Early on this season, he was clearly the club’s MVP as the Isles struggled to find their game at both ends of the ice. Recently Varlamov has played an instrumental role in the team’s surge back up the standings, which currently sits them second in the MassMutual East Division.

Varly got enough of it. What a save! ? #Isles pic.twitter.com/1TWB2PD8Zw

Goaltending has been the backbone of the Islanders now for the last three seasons thanks to the structure in place and the tutelage from Piero Greco and “goalie whisper” Mitch Korn. Robin Lehner — who was a Vezina finalist himself — and Thomas Greiss won the William M. Jennings Trophy back in 2018-19. Varlamov and Greiss followed it up this year prior with some outstanding play in the playoffs.

But all that success translates back to one thing: consistency.

That one facet was going to be crucial in the shortened season format, especially from a goaltending standpoint. Varlamov has provided it in droves through this point of the year — more than at any time in years past — which shows he’s on top of his game this season. He’s playing at a Vezina-worthy level right now. And if it continues and the Islanders keep building on their recent success, there’s no reason he can’t win the award.

The Isles haven’t had a Vezina Trophy winner since Billy Smith won it in 1981-82.

That might change this year with Semyon Varlamov with how he’s looked this season.

The Islanders seem to be a team other clubs around the league should be fear, according to Sports Illustrated. The team’s recent hot surge has them on the minds of many.

One of the critical aspects of the piece is that youth is being served on the varsity. The confidence of Noah Dobson, arrival of Ilya Sorokin and the overall look of the team make them a tough out on any given night.

There was no mention of Oliver Wahlstrom and Kieffer Bellows, but both have added something extra to the offense while being flipped back and forth from the taxi squad.