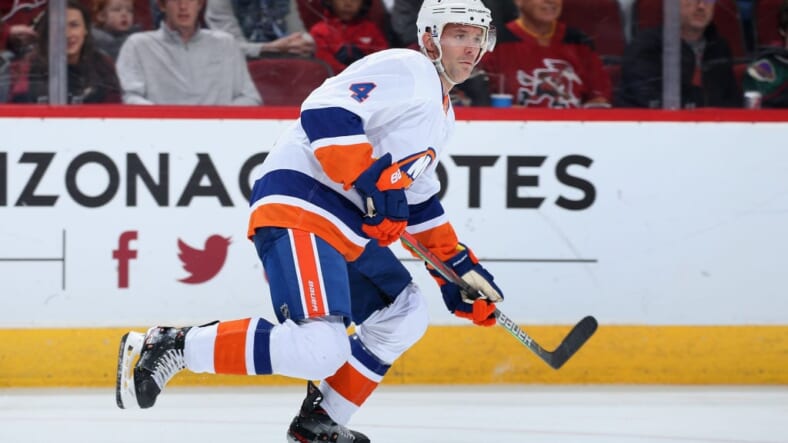 GLENDALE, ARIZONA - FEBRUARY 17: Andy Greene #4 of the New York Islanders in action during the NHL game against the Arizona Coyotes at Gila River Arena on February 17, 2020 in Glendale, Arizona. The Coyotes defeated the Islanders 2-1. (Photo by Christian Petersen/Getty Images)

Andy Greene made quite the first impression in his first game with the New York Islanders.

Greene, 37, whom the Islanders traded for on Sunday from the New Jersey Devils in exchange for a 2021 second-round pick and 21-year old prospect David Quenneville, logged 19:46 of ice time and recorded an assist in the Isles’ 2-1 loss to the Arizona Coyotes.

â€œDuckâ€™s legs under water,â€ the newly acquired D-man told reporters after the game. â€œI was sitting there trying to make simple reads and simple plays. Try to ease my way into the game and go from there.â€

The Islanders had been ailing big time in the absence of Adam Pelech, who suffered a freak injury at the beginning of last month. Greene came in yesterday and immediately filled that void. His presence was felt right away when the Islanders were trailing 1-0.

Just before the six-minute mark of the middle period, the Coyotes came in on an odd-man rush and got off on Islanders goalie Semyon Varlamov that left a rebound and a wide-open cage. Greene, the heady player he’s known to be, saw a streaking Clayton Keller making his way to the front of the net and saved it from being a 2-0 game by blocking Keller’s stick from putting home the loose puck.

Greene wasn’t done there. He contributed on offense, something that’s rare even for him; Greene only had 11 points on the season before yesterday’s game.

In the third with the Islanders down a pair and them pressing, he threw a shot from the point that was deflected home by Anthony Beauviller, cutting Arizona’s lead in half and notching his first point for his new squad.

The Isles’ penalty kill also saw a boost with Greene’s addition. They went a perfect 2-for-2, and Greene himself blocked one shot and saw 2:32 of ice time with the Isles shorthanded.

“Itâ€™s what the doctor ordered,” Trotz also said. “Heâ€™s poised. I thought he handled their top line and heâ€™s a good complement for Pully. Itâ€™ll definitely be a good fit for us.â€

Islanders G.M. Lou Lamoriello still is in need of a forward and could make another move with the NHL Trade Deadline now six days away. But his first acquisition, Greene, showed in one game what he’s going to bring for this team down the stretch.