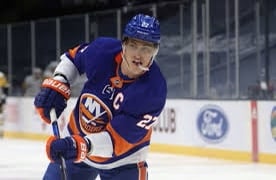 The Islanders are off and running at training camp, and so is their captain Anders Lee.

Lee was back on the ice Thursday with his teammates for the first time since he suffered a season-ending ACL injury last March. And as he told the media, there are no restrictions and heâ€™s 100% heading towards the regular season.

â€œIt felt really good to be on the ice with the boys,â€ the Islesâ€™ captain said after the first session. â€œGood day 1 of camp here. Itâ€™s one of those days where itâ€™s an absolute workday. Good to be out here and get that under our beltâ€¦ For me personally, itâ€™s just continuing on my rehab and my progress here. Itâ€™s great to have camp to be able to do that. Just taking it day by day.â€

So with Leeâ€™s return, the consensus is the Isles should now be an even stronger threat to win a Stanley Cup. The organization did bring in key veterans in Zach Parise and Zdeno Chara this offseason, and kept most of the core intact that has appeared in back-to-back conference/Stanley Cup semifinals, but Lee is seen as biggest acquisition â€” funny to use that term â€” for them going into 2021-22.

â€œWell everyone talks about the Islanders and how theyâ€™ve gone so deep to the semifinals to game seven, right there to go to the Stanley Cup Finals,â€ said NHL Networkâ€™s Mike Johnson yesterday. â€œWhat do the need to get over the hump? Well everyoneâ€™s like you have to get more goals.

â€œWell they didnâ€™t have to go find somebody elsewhere. Theyâ€™ve got Anders Lee coming back. Thereâ€™s your couple more goals. Thereâ€™s 35 more plus playoffs so long as he stays healthy. You almost forget how team-centric the Isles are given how well they played and how deep they went without him. How good he is.â€

The Islandersâ€™ offense is expected to take a big step forward this year with Leeâ€™s return. Before he got sidelined, he was on pace for a possible 30-goal season. The 31-year-old was also vital to a power play which really started to build some confidence. Both those elements are crucial to the clubâ€™s success. And itâ€™s safe to argue this year more than any other.

There are still another few weeks before the regular season begins, but having Lee back in the fold has everyone associated with the Isles excited. From a leadership standpoint , heâ€™s leading the charge once again. Leeâ€™s production should also be right back where it was.

Additions were a major part of this Islanders squad and how they were constructed for this season. Lee is one of them. Heâ€™s the most important one for his club to finally break through.