Would The New York Giants Be Wise To Extend Landon Collins Long-Term? 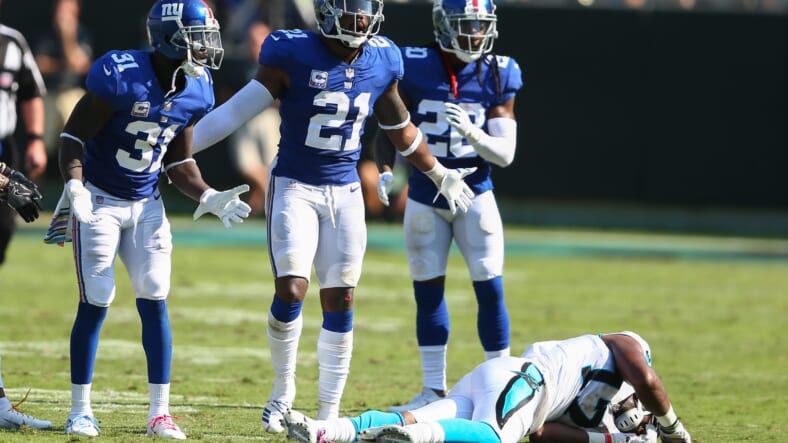 The New York Giants have plenty of tough decisions to make when the 2018 season ends. One of these decisions is whether they make Landon Collins one of the richest safeties in the NFL or if they decide to look elsewhere for another safety.

At a first glance, this looks right considering Collins is only 24 years old and has a First-Team All-Pro season to his name along with 2 pro-bowl appearances in his four campaigns with the Giants.

Almost through 4 NFL seasons, the Giants’ strong-safety has over 400 tackles, averaging over 100 tackles per season. He also has 21 tackles for a loss, along with 4 sacks and 10 quarterback hits.

While the numbers sound amazing when heâ€™s defending the running game, he hasnâ€™t created much of an impact against the passing game. Collins has only intercepted eight passes in his four seasons, five of which all came in 2016 during his All-Pro season. Having three interceptions in the other three seasons isnâ€™t encouraging and heâ€™s still looking for his first interception of the 2018 season. Success at the safety position isn’t purely measured by interception totals but these numbers are very low for a safety.

When looking at Landon Collinsâ€™ stats they look more like stats of a linebacker with an amazing amount of tackles on a consistent basis along with sacks and quarterback hits. This is because Collins rarely plays outside of the tackle box which essentially makes him an extra linebacker.

When James Bettcher was asked how he will cover tight ends in his defense, he replied with, â€œOne of the answers is Landon,â€ but he hasnâ€™t shut tight ends down on a consistent basis by any means. Linebackers are also assigned with covering tight ends throughout the NFL so that doesnâ€™t separate Landon from linebackers in any way.

The main assignment that would separate Collins from comparable linebackers would be down-field coverage, and this is something we have very rarely seen from him. Landon is an amazing NFL safety and a force against the running game, but he does not have the complete skill-set of a â€œdo-it-allâ€ safety.

The top-paid safeties in the NFL currently are players who are proficient against both the running game and the passing game.

Earl Thomas and Lamarcus Joyner donâ€™t provide much run-defense but they are not asked to since they are primarily center-field safeties for their teams which are more valuable than box-safeties.

Signing Landon Collins would most likely require at least $10,000,000 per year but the Giants wouldnâ€™t get the same return on their investment as the teams who signed safeties who can defend both the running game and the passing game well.

The New York Giants arenâ€™t projected to have an abundance of salary-cap space to make a major signing with only $6,363,978 in free money currently – that’s without any large contracts ending in 2018.

Not only is the salary cap an issue, but the Giants have a decent option behind Landon Collins in Michael Thomas. Ironically enough, he has more interceptions than Landon Collins (1) and has played well in a limited role this year.

If the Giants really plan on offering a long-term deal to a safety theyâ€™d be better off making an offer to Lamarcus Joyner if the Rams canâ€™t reach a deal with him. Joyner is a free safety which is harder to replace than a strong safety and he would be a massive upgrade over Curtis Riley who has struggled mightily for the Giants in 2018.

Landon Collins is a fantastic player, but when it comes to free agency, teams almost never get what they pay for. In this case, a team will pay him as an all-around safety only to get a limited return on their investment.