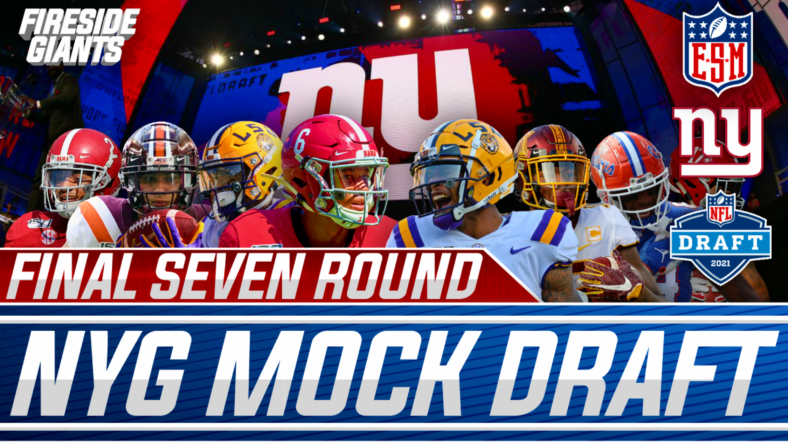 Congratulations, you have officially made it to draft day for the New York Giants! After an off-season filled with speculation and rumors, the Giants walked away with several new players, acquired in free agency. Singing wide receivers Kenny Golladay, John Ross, and a bevy of other talents, they can feel good about moving into a 2021 season with increased production on offense.

However, that doesnâ€™t mean they canâ€™t utilize the draft, specifically the first two rounds, to bolster their offensive unit and add playmakers. The rumors on draft day will be exponential, as the national media has already taken hold and is currently mocking Michigan pass rusher Kwity Paye to the Giants at 11. Others believe a receiver or cornerback could be in their choice, which tells me one thing, they have the media right where they want them, scrambling.

At the end of the day, the Giants want to create confusion and smoke, which only increases their leverage in a trade scenario and keeping teams away from the players they actually want.

Nonetheless, letâ€™s dive into my final seven-round mock draft for the Giants.

As arguably the best college receiver in history, Smith posted over 1,800 yards and 24 touchdowns last year, establishing himself as a gold standard prospect that can produce at the NFL level. Smith is considered the best route runner in this draft class, and considering how deep the wide receivers are this year, that statement should be even more valuable. As a player who can play inside and out, aligning at the “Z,” “X,” and in a slot, Smith is an elite talent that will bring fantastic traits to a Giants’ offense that was inept in 2020.

Last season, the Giants’ offense ranked 31st in points allowed and had one of the worst passing attacks in the NFL. Smith possesses fantastic hands and body control, paired with spatial awareness like youâ€™ve never seen. Some might be down on Smith due to his weight, but as the star Alabama product recently stated, heâ€™s not a weightlifter, heâ€™s a football player. The Giants add one of the best offensive threats in this draft class and immediately give Daniel Jones multiple elite weapons to utilize in just one off-season.

As we know, the New York Giants desperately need to find a plug and play right guard, so they like to go with Oklahoma interior lineman Creed Humphrey. Humphrey is a left-handed center, who can easily make the transition to guard, a position the NYG need to upgrade. With Shane LeMieux grading as the worst pass blocker in football last year, according to PFF, Humphrey has fantastic upside and a mean streak that bodes well for Dave Gettleman and his preferences.

I love Humphrey’s experience in the interior, which includes 37 starts, 36 of them consecutively. As a three-year starter, he has invaluable experience with one of the best offenses in the country and facing off against some elite talent. While some predict he should be a starting center at the NFL level, I believe the Giants are fine adapting their players appropriately â€” consider what they did with Nick Gates.

One of the more underrated edge rushers in this draft class is Dodeyingbo, who suffered a torn Achilles last year but was once considered a fringe first-round selection prior. Of course, this injury is a bit problematic, but I love his versatility and ability to play OLB, defensive tackle, and hand in the dirt five tech. His flexibility and versatility fit perfectly with what Patrick Graham loves to do on defense, so this pairing makes sense in my perspective, but if the Giants are looking for a healthier player, they might eye Miamiâ€™s Quincy Roche, who was a Senior Bowl standout.

Nonetheless, the Vanderbilt defender can easily step in as a rotational option in the mid-rounds, offering an instant presence as a pass rusher, but needs a bit of development in the run-stopping game.

As a player, we have routinely spoken about and reviewed on the Fireside Giants YouTube channel, North Carolina state interior defender Alim McNeill makes perfect sense for the Giants in the fourth round. As a 6’2″, 315-pound nose tackle, McNeill has a versatile make-up, allowing him to rush the passer adequately over-center but also stop the run and plug the “A” gaps. As a former running back in high school and linebacker, he has above-average athleticism and the raw ability to hold his own against double teams.

Considering the Giants recently let Delvin Tomlinson walk in free agency, Alim would be a high upside selection in the fourth round, who has a second-round grade on him from some analysts. He projects as a 3-4 nose tackle, which would fit perfectly for the Giants and their defense.

Pooka Williams is an intriguing prospect who I believe would offer the Giants a replacement for Dion Lewis. He is extremely versatile in space and can make defenders miss in the open field. While he is quite small at 5’9″ and 175 pounds, he can offer some value in the receiving game as a gadget player. The Giants might want to take a player that can contribute right away, but Williams has decent upside, holding more power than you would imagine from a smaller back.

Aside from Saquon Barkley, the Giants donâ€™t really have a solid receiving option out of the backfield, and I believe Williams would offer them something similar to Lewis and James White.

If UCF corner Tay Gowan slips to the sixth-round, the Giants shouldnâ€™t hesitate to select him. As a player with adequate size and strength, he is a man coverage corner who has a ton of upside if developed correctly. We also interviewed going on the Fireside Giants YouTube channel, and he came across as incredibly motivated and confident in holding down top receivers at the NFL level. While heâ€™s a while away from reaching that status, he has desirable measurableâ€™s who simply needs the right coaches and teachers around him to make the most of his talents.