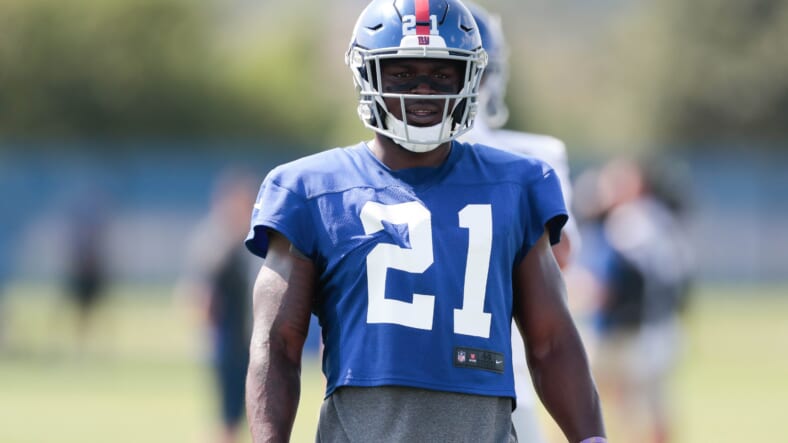 The New York Giants went on a spending spree this off-season, backloading a majority of the contracts to 2022 and 2023. With the expectation that the salary cap will increase tremendously over the next few years due to a massive TV deal executed this off-season, signing lofty contracts now that expire in two seasons makes a ton of sense. Not only do they match up with the expanding cap space, but also the expiration of quarterback Daniel Jonesâ€™ rookie deal.

However, in the process of signing these big names, they were forced to let go of one of their captains, interior defender Delvin Tomlinson. Normally, letting influential players walk that have a significant impact on the locker room is a negative, but the Giants have plenty of veteran players who can take over in that facet. One of them is safety Jabrill Peppers, who had a career year in 2020, totaling 91 combined tackles, 2.5 sacks, eight tackles for loss, and allowed a 65.2% completion rate over 69 targets, nearly double his sample size from 2019.

Peppers proved that he is not only an energizer on defense but deserves to be a long-term solution in the middle of the Giantsâ€™ safety unit. Currently, heâ€™s projected to earn $6.77 million for the 2021 season, entirely guaranteed. The only way the Giants could get his salary off the books would be to trade him, but that would be a devastatingly poor decision.

The New York Giants have gotten the best out of Peppers:

The former Cleveland Brown has taken significant steps forward in his career since joining Big Blue, making the transition from free safety to strong safety, where he has thrived and developed under Patrick Graham in 2020.

Last season, he played 383 total snaps in the box, 264 at slot corner, and 143 at free safety. While he allowed 499 yards and two scores, the Giants played a predominant zone coverage scheme, which can oftentimes allocate yards to players who are simply close to the pass catcher and not in man coverage. This can often times skew the statistics, as Peppers was a quality force in the run game and adequate when dropping back into coverage. He also picked up a few impressive sacks, one of which against the Seattle Seahawks saw him burst through running back Chris Carson and wallop Russell Wilson in the backfield.

Ultimately, that leads us to our primary discussion â€” should the Giants extend him now instead of waiting?

Theoretically, if the Giants did extend him, they could lower his cap hit for the season and maybe sign a better offensive line piece to compete.

Alternatively, Peppers might want to take a chance on himself, balling out in 2021 and compounding that into a massive contract next season. Given his growth, only an injury would significantly hurt his value and potential earnings, which is possible, even probable in the NFL. Considering heâ€™s missed a few games over the last two years, if the Giants did offer him a long-term extension, Peppers might be smart to accept and cash in as the cap sky-rockets in 2023 when he turns 28.

This leads me to believe that the Giants simply havenâ€™t offered him an extension, but they could get a deal done mid-season if he proves to take another step forward. They also did spend a draft pick on Xavier McKinney last year and signed Logan Ryan to a three-year deal this past off-season. Peppers is a different player, though, featuring a thumper style that isnâ€™t afraid to get physical in the run game. I believe the Giants would be intelligent to keep him around for the long term, and the 2021 season will tell us everything we need to know.