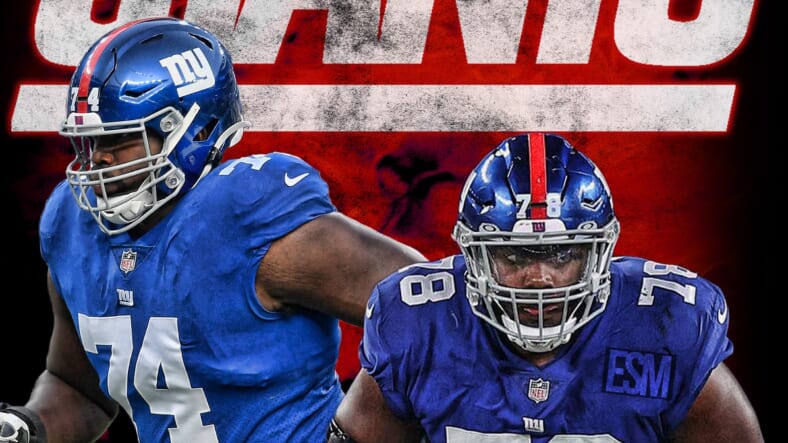 Many are still concerned about the New York Giantsâ€™ offensive line heading into the 2021 season. According to PFF, their OL ranked near dead last in pass-blocking efficiency last year and average in run blocking, indicating upgrades are required. Still, there are a few factors we should consider before claiming this unit has terrible.

In fact, when you look at each individual position, you see plenty of reasons why they struggled in 2020, which is why last year isnâ€™t a good sample size to utilize for their future potential. That is a primary reason why general manager Dave Gettleman and head coach Joe Judge didnâ€™t jump to conclusions and draft an OL with a high draft selection.

Going through each position on the New York Giants offensive line:

When looking at Andrew Thomas objectively, you quickly see that he allowed 10 sacks and 39 hurries last year in his rookie season. He struggled considerably at times, but after Marc Colombo was fired, he saw improvements across the board, especially in pass blocking.

However, Thomas dealt with an ankle sprain injury that required surgery in the off-season, which he suffered during training camp before the regular campaign even began. He battled the entire year with discomfort and having alleviated that pain, he should be 100% in 2021 with even more consistent coaching.

I believe Thomas will have a nice bounce-back season in year two, and having a bit of continuity in the trenches is also beneficial. The same offensive scheme under Jason Garrett, with additional layers added, will be helpful in his progression and harass coach Joe Judge made sure to get him the proper coach to help build strengths and not work backward with Rob Sale.

One of the weaker players for the Giants in 2020 was Will Hernandez, who had trouble next to Thomas at left guard. When your left tackle is being beaten inside, a cardinal sin for OTs, it causes problems for everyone around him, including Hernandez, who was hit with one sack and allowed 19 hurries. In addition, Hernandez contracted COVID-19 and never returned the same, battling fatigue for the second half of the season.

Hernandez seems to have lost a bit of weight to fit the Giantsâ€™ schematics more appropriately. They like to utilize pulling guards across the formation, and Hernandez should have a bit more agility and quickness to his game this upcoming season, which I think will be an added benefit.

Nick Gates spent his 2020 season adapting to an entirely new position he had never played before. Having played right tackle and right guard previously with the Giants, he made a swift transition to the interior, getting better as the season progressed. However, it was only fair to give him time to learn the ropes at his new position, and he ended up being one of the stronger points on the line to close the campaign. 2021 should offer a far more consistent season with more continuity around him.

The real problem is right guard, a position the Giants didnâ€™t address in the draft after cutting Kevin Zeitler to leave a void. They currently have Shane Lemieux and Zach Fulton as their two options, and while thereâ€™s reason to believe that Lemieux can develop adequately, thereâ€™s not enough proof to justify him being the only option. Without a preseason last year or in-person training, Lemieux did not get the proper coaching entering the 2020 season. However, with a full off-season of work and a real training camp to get things going, I believe them you will take a step forward, which will prove to be beneficial.

Shane was PFFâ€™s worst graded guard in 2020, but based on the factors that influenced not only him but every other player on the line, we should give him the benefit of the doubt going forward.

The right tackle position is another one that might cause confusion for fans. Nate Solder opted out of the 2020 season due to COVID-19, and Matt Peart contracted the virus, which limited his snaps down the stretch and hurt his stamina. I do believe a rotation at RT would be beneficial as they start the new season, allowing them to engage in a position battle. Solder hasnâ€™t played right tackle since his rookie season, and Peart is going into his second year in the NFL, so the Giants are hoping for a nice jump in efficiency.

Ultimately, Matt did show prowess in the run-blocking category but struggled in pass protection. He has the adequate size and strength to be a great option on the right side, but he needs more live reps to get to where he needs to be.

I believe the Giants are higher onÂ Peart than we think, and I see why based on his tangible traits. Heâ€™s another player that deserves another opportunity to show he can be an answer instead of a problem at right tackle.