Why the New York Giants aren’t bringing back DeAndre Baker 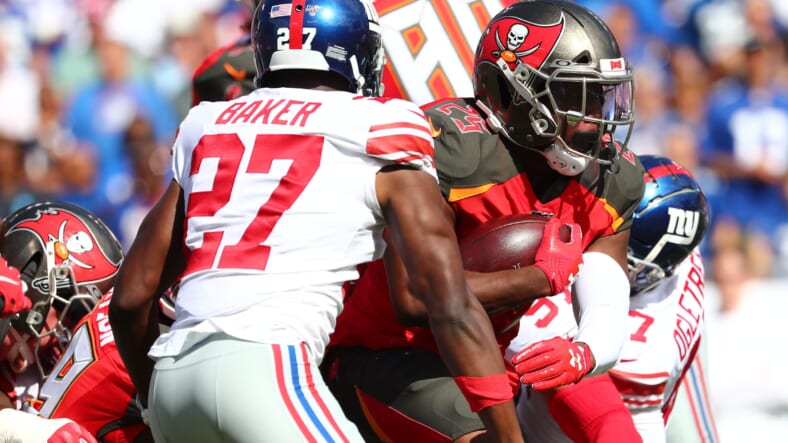 The DeAndre Baker legal case is finally over, and it looks like the former New York Giants cornerback will walk away a free man. The case had a lot of twists and turns, of course. First it looked like Baker might be innocent and that it might be a misunderstanding. Then it looked like he could get put away for a long time. And then there was enough uncertainty for the Giants to move on from the player.

However, now that it’s all said and done, it doesn’t look like the Giants are interested in bringing Baker back.

Giants are not in on DeAndre Baker.
Teams interested: Chiefs, Bengals, 49ers and Jaguars. https://t.co/HS3pPAknVO

The big question for many fans will be why that’s the case.

The reasoning behind the Giants’ decision

The real reason why the Giants aren’t bringing back DeAndre Baker? There’s not much room to just add another corner to the rotation right now, and the team is happy with who they already have playing around top corner James Bradberry in the secondary.

That lack of space for more corners recently saw Corey Ballentine released from the team and picked up by the Jets. The spot that would have belonged to Baker had he not been released due to legal trouble has been taken over by Isaac Yiadom, who has been in the mix the last few games as a permanent member of the secondary. His share of the snaps on defense has risen since joining the team this offseason and it doesn’t look like the spot will be given up in the immediate future.

Especially not for a player like Baker who was a problem for the Giants even before his legal case.

The Giants don’t want to take a chance on Baker

It’s easy to forget about some of the troubles Baker had before, now that much of the recent talk about him has shifted towards the legal troubles. But even if you take those out of the discussion, you’re still left with the picture of a player that was on the brink. This would be a season where Baker needed to either perform better or lose his spot.

While it did look like he would improve more from some of his earlier games, the Giants weren’t willing to bet on that by bringing him back. Baker had a number of problems. There were reports during his rookie season of him not paying attention in meetings and he received widespread criticism for not putting in enough effort on the field.

He could have turned things around as a second year player. But giving him a chance requires giving him a roster spot. Right now, the team just doesn’t have one of those to give to a player that already has a history of these problems, even if he does still have a chance to get better.

With this route, they risk looking worse as a franchise if Baker immediately improves and looks better while playing for another team. But they don’t risk throwing a wrench into an improving team by reintroducing a problem player of the past.