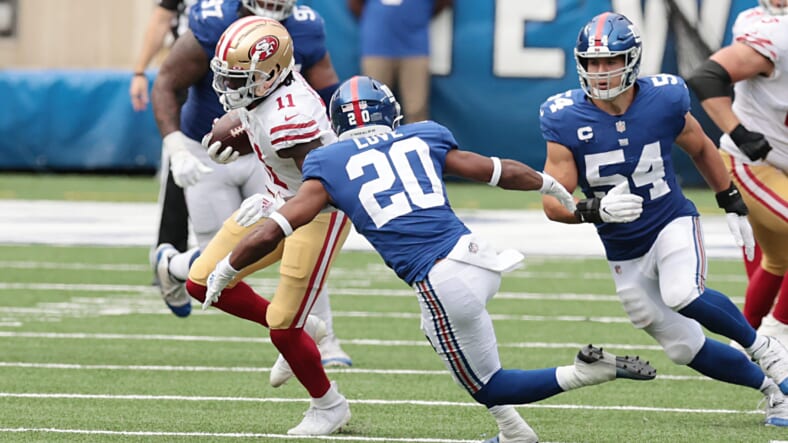 The New York Giants are loaded with talent in the secondary. The unit features a possibly elite cornerback duo in James Bradberry and Adoree’ Jackson. It also features a sick trio of safeties on the back end, Jabrill Peppers, Logan Ryan, and Xavier McKinney. But this is not a top-heavy unit. Depth pieces, like Julian Love, also stand out on this roster.

Julian Love was once a starting safety on the Giants’ defense. But as the team improved and acquired more talent, Love’s starting status changed. Instead, the team now views Julian Love as a versatile depth piece that can fill in at multiple positions, primarily as a backup.

But the term “backup” should be used loosely when discussing Julian Love. The Giants’ third-year defensive back will see a ton of playing time in 2021.

Why Julian Love will see a ton of playing time

Last year, Julian Love primarily played safety. But in college, Love was a cornerback. He made the transition to strong safety as a rookie before playing more free safety in his second season. The Giants even had Love play a little bit of slot and outside cornerback last year.

Julian Love has been taking snaps with the first-team defense at slot cornerback during training camp this year. The Giants clearly plan on moving Julian Love all over the field, using him in a versatile way. Peppers, Ryan, and McKinney will be your starting safeties. But Jabrill Peppers could play a lot of linebacker this season. This opens the door for Xavier McKinney at safety while also opening the door for Julian Love at nickel cornerback.

The Giants are bound to run plenty of “big nickel” this season, a defensive formation that features three safeties. That is when Love would play the “big nickel” role. The other two safeties in that formation would be Ryan and McKinney, while Peppers plays weakside linebacker. This formation allows the Giants to get all of their top defensive backs on the field at the same time, giving them a matchup advantage. If the Giants run this formation a lot, then Julian Love will see a ton of playing time in 2021.