Why Elerson Smith is the New York Giants’ most intriguing prospect 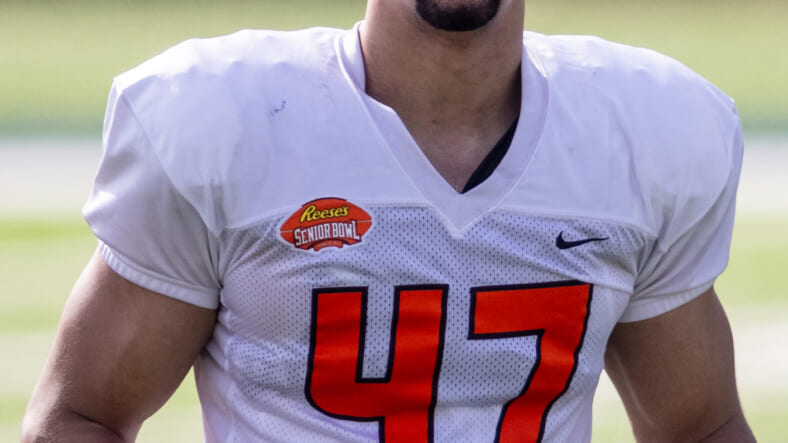 The New York Giants had one of the best drafts in the NFL, no question. On day one they secured a playmaker on offense in Kadarius Toney while also picking up a first- and fourth-round pick in 2022 from Chicago. They then followed that up on day two by trading down once again, this time with Miami. They gained an extra third-round pick in 2022 and selected pass rusher Azeez Ojulari with the No. 50 overall pick. In round three they traded up to snag cornerback Aaron Robinson, a versatile defender who can line up outside or in the slot. But it was on day three where they found their most intriguing prospect – edge rusher Elerson Smith out of Northern Iowa. Here’s what makes him so fascinating:

Why Elerson Smith is the New York Giants’ most intriguing prospect:

Size is more important than ever in the NFL. Take new Philadelphia Eagles wide receiver Devonta Smith for example. He slid to No. 10 overall strictly because of his lean 166-pound frame. Despite him being the first receiver to win the Heisman Trophy in nearly 30 years and breaking almost every SEC single-season receiving record, his size prevented him from going earlier in the draft.

For others, like Elerson Smith, size can be a huge strength for a player’s stock. Check out Smith’s insane measurements from his pro day at Northern Iowa: 6’6″ tall, 252 pounds, and a whopping 83″ wingspan. His mammoth-like stature is not wasted while on the field either. Take a look at this clip from a game against North Dakota State from 2019:

Giants fourth-rounder Elerson Smith showing off his long arms (34") and vertical (41.5") in this clip from 2019. pic.twitter.com/sJr4RvH5HI

Smith uses his size to its maximum potential by tipping the ball the moment it is released from Lance’s hand. He times his jump perfectly and uses all 34″ of his arms to affect the pass. Could a defender standing at only 6-foot make that play? Not a chance.

What makes that play even more impressive is who he did it against. For those unfamiliar with Smith’s alma mater, Northern Iowa is a member of the Missouri Valley Conference in the FCS. That doesn’t mean he’s facing lesser competition though. The quarterback for NDSU in the clip above is Trey Lance, the No. 3 overall pick in last week’s draft and the future QB of the San Francisco 49ers. Furthermore, the tackle Smith is lined up against is Dillon Radunz, a second-round selection by the Tennessee Titans.

There’s an argument to be made that Elerson Smith is the most impressive athlete in this year’s draft class. For a 6-foot-6-inch 252-pound human, Smith’ athleticism is off the charts. All you need to do is watch his vertical jump from his pro day to understand the specimen he is:

His jump, 41.5 inches, was the seventh-best of any prospect in the entire 2021 draft class, regardless of position. No other edge rusher came close to his mark. To weigh 252-pounds and have the hops of an NBA player is absurd.

Also on his athletic-rÃ©sumÃ© are his high school achievements. While attending Minneapolis South High School he was a first-team all-state selection by USA Today as a tight end. Yes, you read that correctly. As a 6’6″ senior he was catching passes and torching defenses while also being voted to the all-state second-team as a defensive end. He also participated in track and field, wresting, and basketball (for obvious reasons) in high school. He dominated those as well.

His room for growth

Most of the day three picks in the NFL are considered projects with potential. Smith is no exception. But he made sizable progress at Northern Iowa in an area that is now his greatest strength – size. As a senior in high school Smith was fully grown but weighed only 190 pounds. This led to him not receiving a single offer from a FBS program and having to attend Northern Iowa.

The moment he arrived in Cedar Falls, Iowa he quickly got to work and made sure his lean-frame would never get in his way again. Over the course of his four years playing for the Panthers Smith gained more than 50 pounds and still has room to add another 30.

Most of Smith’s 2021 season will be spent in the gym with strength and conditioning coach Aaron Wellman, and that’s okay. The talent, while raw and undeveloped, is there and plentiful. If he is able to add those extra pounds in the form of muscle and maintain his athleticism, Elerson Smith could be a force in the Big Apple for years to come.