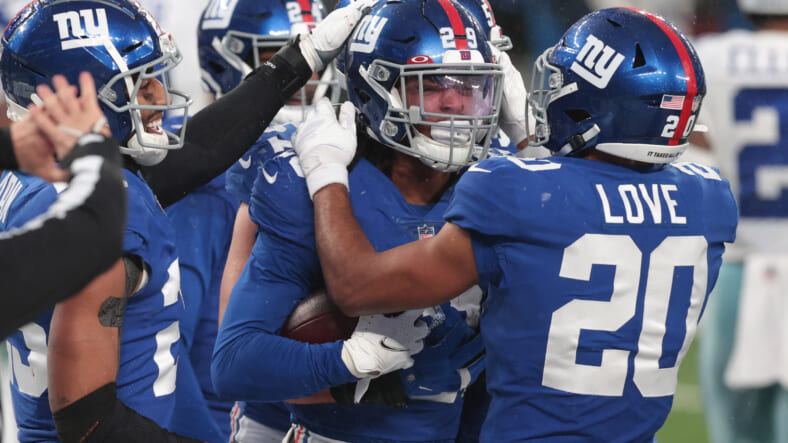 The New York Giants are well on their way toward one of the best defenses in football next season, especially after the acquisition of CB2 Adoree Jackson.

In 2020, the Giants had one of the best units in the NFL, ranking ninth in points allowed per game despite a massive hole at the second corner position and a severe lack of a pass rush. Injuries to Lorenzo Carter and Oshane Ximines kept them out for nearly the entire campaign, so coordinator Patrick Graham had to compensate for their loss.

With Carter and Ximines expected to return in 2021, the Giants will have a semblance of a pass rush and potentially elite cornerback paired with James Bradberry. If they can remain healthy, the Giants will be in great shape moving forward, and thatâ€™s not even considering who they land in the 2021 NFL draft (mock).

In this theoretical scenario, the Giants select Micah Parsons out of Penn State with the 11th overall pick. During his Pro Day, Parsons ran an insane 4.39 40-yard yard dash at over 240 pounds. He is an athletic unicorn at his size and possesses the skills to be an elite run-stopping linebacker and potential pass rusher at the next level. Despite opting out in 2020, teams have seen enough from him to justify him being a top 10 pick, who could easily slip to the Giants at 11 with so much great talent in this yearâ€™s draft. During his last season of production, he posted 109 tackles, 14 for a loss, 5.0 sacks, five passes defended, and for forever fumbles.

At the end of the day, Parsons is a player most teams would build a foundation around, and the Giants already have a stellar unit that would only take a step forward with his presence. With upside as a pass-coverage linebacker, Parsons has the versatility and position-less nature to fit perfectly in Grahamâ€™s scheme.

With elite corners, a trio of safeties that brings a dynamic style of play to the football field, and the return of a few adequate pass rushers, the Giants could be looking at the best defense in football, and that is something management will be considering heavily when the 11th pick occurs in just under a month.