What Nick Bosa Offers The New York Giants If He Somehow Falls To No. 6 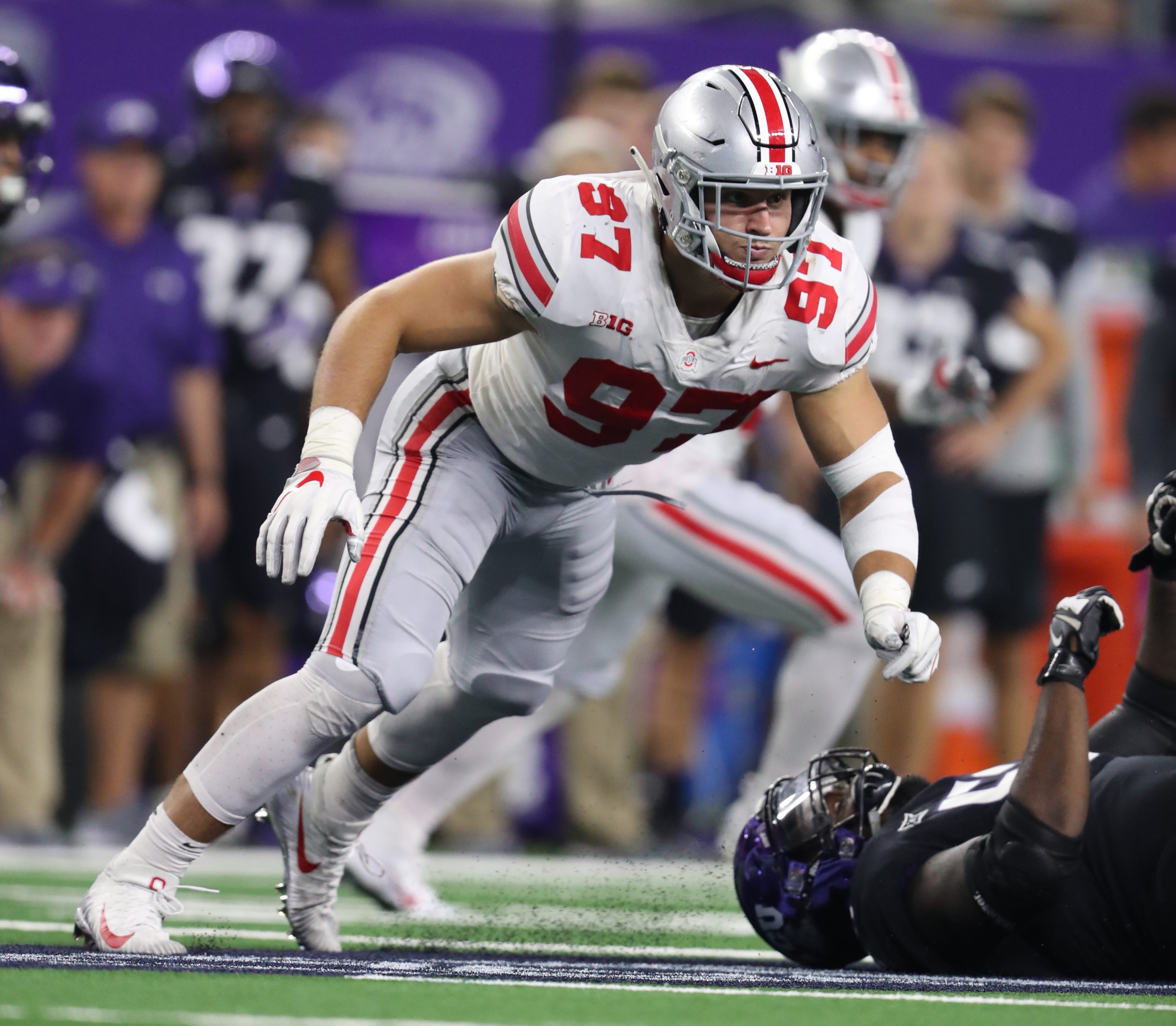 Nick Bosa is the younger brother of former number 3 overall pick from the 2016 NFL Draft, Joey Bosa. Joey Bosa has been one of the best edge defenders in the NFL since joining the league in 2016. Some believe his brother, Nick, could be even better. The question is, can the New York Giants realistically consider him an option?

Standing in at 6’4″, 263 pounds, Nick Bosa has the perfect build for an NFL edge defender. Bosa declared for the 2019 NFL Draft after his junior season at Ohio State in which he only played 3 games due to injury. After suffering the injury, Bosa decided he would not return to the collegiate field and risk re-injury. He was already receiving the first-overall buzz from NFL scouts and analysts, so it was time for Bosa to focus on his NFL career.

In Bosa’s collegiate career, his statistics do not tell the full story. At all. Some might look at Bosa’s career-high 8.5 sack sophomore season and ask, “why is this guy a top pick?” Turn on the tape and you will see why.

Nick Bosa is a 4-3 defensive end/edge defender who is always around the ball. Bosa is constantly adding pressure or making tackles near the line of scrimmage. He seems unblockable at times with a variety of pass-rushing moves and counter-moves.

His sack totals do not tell the full story. Bosa creates pressure at a rate unprecedented to the rest of his position’s draft class.

Last season, Bosa won 28.0 percent of his pass-rushes. The next best number among all returning Power 5 defensive linemen was Anthony Nelson of Iowa at 22.9 percent. – Pro Football Focus.

Nick has insane burst and flexibility. He jumps the snap then flies around the outside with tremendous bend to get to the quarterback. On his tape, Nick has shown the ability to attack with inside moves too. He does not simply run around the edge every snap. He can go inside or outside to create pressure. Nick Bosa can win with power or finesse.

Possibly Bosa’s best trait is his ability to be involved with seemingly every single play. If the ball is being thrown, he is in the backfield creating pressure. If the ball is handed off, Bosa is on his way to the runner and in the area of the ball within seconds.

Here is a clip of Bosa using his strength and power to bull-rush an offensive lineman and sack Baker Mayfield:

Here is a clip in which Nick Bosa shows his ability to make plays in run defense as well:

Nick Bosa has elite bend and quickness off the edge:

Best player in the country, Nick Bosa, with the strip sack pic.twitter.com/4loUJ6H8sS

Bosa is pretty close to it, but no prospect is truly perfect. Plenty of analysts have questions about Bosa’s character and leadership abilities. Some say he quit on his team in his final season. Others argue that he made the right decision, since an injury could have cost him millions of dollars from the NFL.

On the football field, Bosa is an elite pass-rusher. He is also great in run defense because of his ability to disengage blockers and pursue the runner. However, he is not going to consistently plug up holes with pure strength. He will not be able to move linemen into running lanes to shut down a play. If Bosa impacts a run play, it will be with his ability to get off of blocks, not his ability to move through blocks.

Another minor weakness is Bosa’s knack for ending up on the ground. His bend and flexibility is incredible, but sometimes he might push himself a little too far and knock himself off balance. It happened to him a few times at OSU. It is not a major point of concern, but something Bosa could work on as he transitions to the next level.

Nick Bosa is constantly mocked as the number one overall draft pick. He is considered the best prospect in this draft. He is a lock for the top-3 and probably locked into the top-2.

If the New York Giants want to draft Nick Bosa, they will need to make a major trade. They would also need to decide that they do not want to draft a quarterback in the first round of the 2019 NFL Draft. This trade could be a possibility if the Giants sign a quarterback in free agency, or if they decide Eli Manning is still part of their future.

If for some reason Bosa slides in the draft to the Giants’ 6th pick, he is almost a no-brainer. Bosa truly is that talented of a prospect. If there is one “can’t-miss” prospect in this draft, it is Nick Bosa.