What do the New York Giants have in UDFA center Brett Heggie? 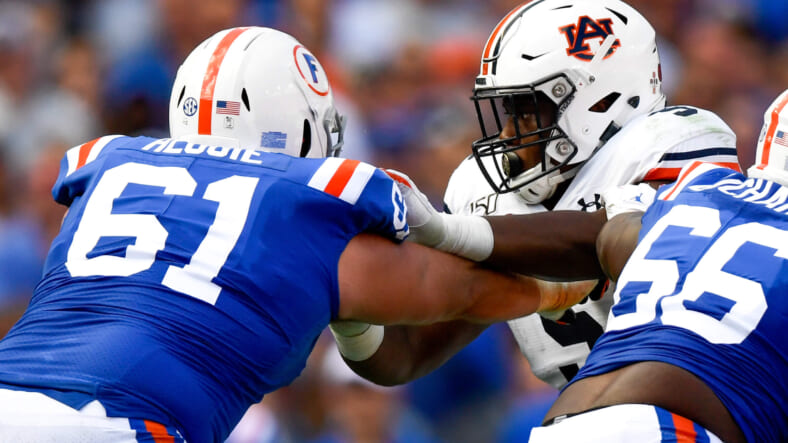 The New York Giants‘ 2021 NFL Draft class was widely regarded as a slam dunk by fans and analysts alike. However, one consistent criticism with the Giants’ approach to this year’s draft was their failure to address the offensive line. Reportedly, there were linemen on New York’s radar, but the value was not there when the team was picking or the players were selected by teams picking ahead of the Giants.

Now, the Giants will enter the 2021 season with a young, inexperienced, and unproven offensive line. The Giants’ offensive line is by far their biggest question mark on the roster. The New York Giantsâ€™ pass-block win rate in 2020,Â according to ESPN, ranked dead-last in the NFL at 46%. Their run-block win rate ranked 18th at 70%, which is about average or slightly below.

The Giants’ offensive line was one of the worst in the league last year and the front office did not make any improvements this offseason. Walking away from the 2021 NFL Draft without any selected linemen was a questionable decision. But the Giants recognized this fault and made it a priority to sign undrafted rookie Brett Heggie to the roster. But what exactly are the Giants getting in the former Florida Gator? Does he have a shot at making the Giants’ final roster this fall?

The New York Giants had a very small three-man UDFA class this year. Brett Heggie out of UF stood out as the lone rookie interior offensive linemen acquired by the team this offseason. Many questions have been raised regarding the interior of the Giants’ offensive line which is set to see Shane Lemieux and Will Hernandez start at the guard positions while Nick Gates starts at center.

Brett Heggie was an interior offensive lineman during his career with the Florida Gators. He played guard from 2017 to 2019 before switching to center full-time in 2020. Heggie earned multiple SEC Offensive Lineman of the Week honors throughout his collegiate career. Playing in Florida’s high-octane offense feature NFL talents like Kyle Pitts, Kadarius Toney, and Kyle Trask, Heggie was a reliable pass-protector and vicious rub-blocker for the Gators. Check out this clip of Heggie mauling an Ole Miss defensive tackle, moving him like a tackling-sled ten yards downfield:

Brett Heggie won SEC Offensive Lineman of the week during the matchup with Ole Miss. In that game,Â the Florida offense set a school record for yards against an SEC opponent (642 yards).

New York Giants head coach Joe Judge loves versatility on the offensive line (see Nick Gates, Zack Fulton, and Matt Peart, all players that have contributed at multiple positions along the line). Heggie is another one of those versatile offensive linemen that fit Joe Judge’s mold. He has experience starting games at left guard, right guard, and center.

Heggie projects as a solid backup at all three interior positions who can come in and allow the offense to function. – Sports Illustrated

According to Lance Zierlein of NFL.com, Brett Heggie has the “desired size for an NFL center” and “displays adequate power.” However, Zierlein’s analysis also notes that Heggie has “major protection concerns as a guard” and sometimes “lazy” hand placement. Heggie seems to be a quality developmental piece as a versatile backup offensive lineman that could contribute on the Giants’ practice squad early in his career.

The long-term outlook for Heggie seems to project him as a quality backup, but most draft analysts seem to doubt his potential as a quality starter in the NFL. But given the state of the New York Giants’ offensive line, Brett Heggie seems like a young player that the coaching staff can be excited about and look forward to developing.