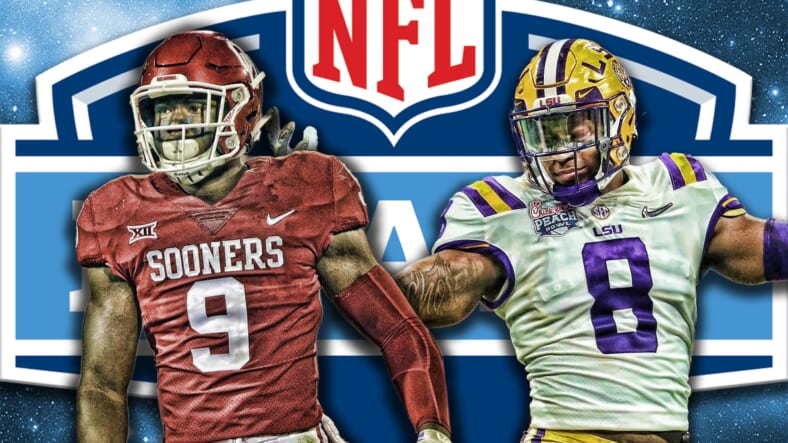 Taking a look at two linebackers the New York Giants can target in the NFL Draft:

Predicting where the Giants will go with the fourth overall pick in the 2020 NFL draft is impossible. General manager Dave Gettleman and head coach Joe Judge have made it incredibly difficult to break down there estimated selection.

Gettleman has mentioned the depth at tackle in this draft class but also addresses that Nate Solder has struggled to cover Daniel Jones’s blindside. Figuring out how to allocate a top-five selection isnâ€™t only difficult for us, but it is problematic for the executives in charge.

The Giants could easily pass on Clemson stand out defender Isaiah Simmons, but for the sake of trading back, there are other linebackers to consider later on in the first round. Letâ€™s look at two linebackers that could fit the bill for the Giants.

Having only spent one season as a bonafide starter with LSU, Patrick Queen emerged as one of the best linebackers in the country last season. Heâ€™s a bit undersized at 6’0″ and 229 pounds, but his elite speed and instincts give him the developmental upside teams are looking for. He has the ability to play all three downs, covering running backs and even slot receivers adequately. He can be a little slow in the run game diagnosing plays, but when he does, his quickness shows up significantly.

Queen has incredible sudden agility and athletic ability. His lack of experience has knocked him a bit, but those are all things that improve with live-action. I believe he has the highest upside of any linebacker not named Isaiah Simmons.

There is a chance Queen slips to the end of the first round where the Giants could have a shot by trading up to secure him.

Some argue that Murray is an even better prospect than Queen, as he stands a bit taller at 6’2″ and 241 pounds.

Murray also contains elite speed, despite being a bit slower than Queen. However, for his size and additional weight, it makes sense that he is only .2 seconds slower than the LSU product. Murray landed a 4.52 40-yard dash while Patrick logged a 4.50.

However, the former four-star recruit out of Missouri Coty, Texas, exploded onto the scene for the Sooners in 2017. Ever since itâ€™s inception into collegiate football, he has climbed the ranks and establish himself as one of the most talented linebackers in the country.

His playmaking ability is impressive, and his speed shows up all over the field. Murray tallied at 102 total tackles and 17 for a loss in 2019, showing off his ability to diagnose the run and react quickly to screen passes. He is another extremely talented player with high upside, similar to Queen. If the Giants do trade back into the middle of the first round, Murray might be a player worth considering.

Another interesting traffic tidbit, NFL analyst Ian Rapoport stated that no negative words have been correlated to Murray from teams. He is building a nice draft stock for himself.