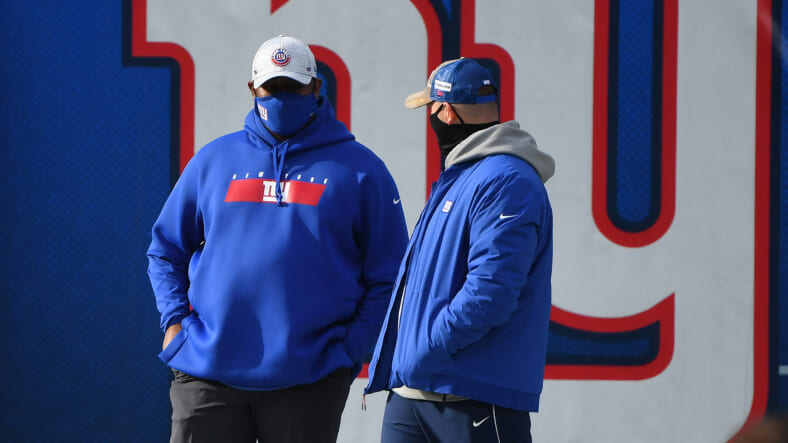 The New York Giants have a very unique opportunity to walk away winners in the 2021 NFL draft by simply staying put. With the 11th overall pick, the Giants can let the draft unfold in front of them and pick the best player on the board, which will undoubtedly have an immediate impact on either side of the football.

The Giants could surely target a player like Penn State linebacker Micah Parsons or take one of the Alabama receivers to offer Daniel Jones a bit more firepower on offense. Thereâ€™s also a possibility that Northwestern stand-out lineman Rashawn Slater could be available, which would give Jones more protection in the trenches. Either way you look at it, sitting still at 11 is the best-case scenario.

Some analysts believe that there arenâ€™t even 20 players in this draft class that deserve a first-round grade, and without a plethora of knowledge, the Giants will likely stick to their guns and utilize their coaching staff comprised of former college scouts and coordinators to help piece together their draft board.

However, there are two scenarios that could unfold that would benefit the Giants tremendously, and either would see them walk away as winners.

The New York Giants can walk away winners in the draft:

If either DeVonta Smith or Jaylen Waddle falls to 11, the Giants simply canâ€™t go wrong with either. The best part about this draft class is that a potential five quarterbacks could go on the top 10 picks, meaning one of the elite talents will drop to 11. The Giants might be getting calls from other teams to move up, but if they stick to their guns, they can easily take an elite player with gold jacket potential.

Smith is arguably the best college receiver in history, racking up over 1,800 yards and 24 touchdowns last year. Waddle spent a majority of the 2020 campaign injured, but when healthy, he has a Tyreek Hill-esq play-making ability and elite speed.

In this scenario, the Giants acquire a premium talent to offer Daniel Jones while landing an offensive lineman in the second round, plugging the right guard spot that was left vacant by Kevin Zeitler in free agency. This is a winâ€“win scenario, in my opinion, solving two major holes and providing Jones with the necessary firepower to make an exponential jump in 2021.

If we look at scenario one in an opposite light, the Giants still walk away victorious. Whether it is Slater or USC lineman Alijah Vera-Tucker, the Giants will have an adequate year one protector for Jones. Vera-Tucker has the ability to play tackle and interior guard, something that Slater is also projected to do at the NFL level. With such an extremely deep wide receiver class, the Giants can wait until the second round to land a second-tier option like Elijah Moore or possibly even Terrace Marshall.

With such good connections to Alabama, I would be surprised if the Giants didn’t walk away with one player from the school in the first two rounds. Smith and Waddle are two prospects the Giants would love to have at 11.