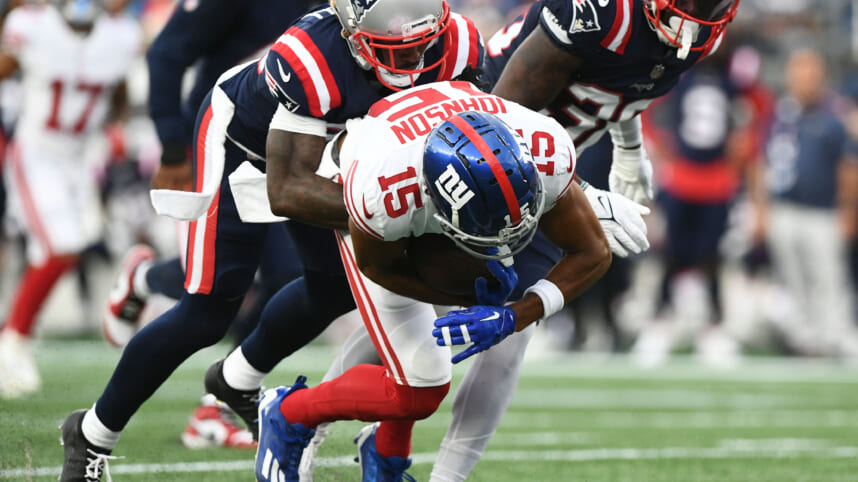 The 2022 New York Giants wrapped up their first preseason game last night with a 23-21 victory. As is usually the case in the preseason, younger, depth players got an opportunity to go out and prove themselves. For the Giants on Thursday night, few were better than third-year wide receiver Collin Johnson.

In last night’s win, Johnson was targeted eight times. He caught seven of those passes for 82 yards (11.7 per catch). His longest reception went for 17 yards, which resulted in a fumble. The turnover was the only issue for Johnson in the game. Overall, it was a night in which Johnson helped his final roster chances tremendously.

Based on his massive size alone, Johnson offers the Giants something unique. He is extremely tall, over 6-foot-5 and a half. To boot, Johnson is very big with his 220-pound frame. His imposing size was on display throughout last night’s game. Johnson caught most of his passes in the short to intermediate range, with a few receptions operating over the middle of the field.

As mentioned above, Johnson is in year three of his young career. He is currently 24 years old and turns 25 in late September. Johnson has been with the Giants since early September of last year. In 2021, he played in 12 games for the Giants (223 snaps). He finished with 11 catches and 105 yards. As a rookie in 2020, Johnson had 18 catches for 272 yards (15.1 per catch) and two touchdowns.

At the moment, on the Giants’ first released depth chart, Johnson was listed with the fourth team. Ahead of him are a few roster locks in Kadarius Toney, Wan’Dale Robinson, Kenny Golladay, and when he gets healthy, Sterling Shepard. Some of the players Johnson is likely in competition with are Darius Slayton, Richie James, and CJ Board. From that bunch, James stood out with three receptions for 44 yards and a touchdown last night.

Hopefully, Johnson can build on this strong performance in the Giants’ next two preseason games. If so, he will only bolster his chances of making the final-53. For Johnson to prove himself as a depth, possession target being a young player would be great for the build of the Giants roster.