The New York Giants have the toughest road to the playoffs 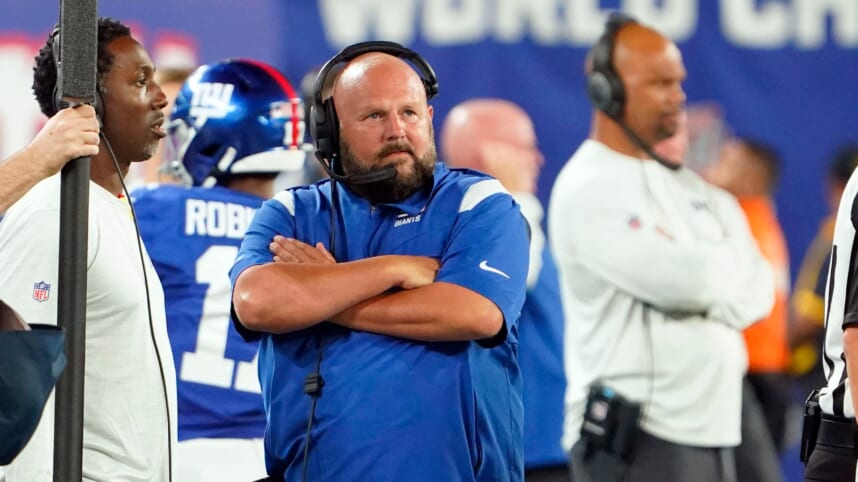 After a disappointing 4-13 2021 season, the New York Giants have exploded to a 7-2 start in 2022. New head coach Brian Daboll has propelled his team to its best start since 2008. Big Blue is back on track and firmly in the playoff hunt, looking to make their first postseason appearance since 2016. But the road to the playoffs is not over yet and what lies ahead may give the Giants some trouble.

The New York Giants have the most difficult remaining strength-of-schedule (.633) in the NFL (per Andrew Siciliano). Despite getting off to a hot start, the Giants have not solidified a post-season appearance just yet and will need to elevate to a new level to clinch the postseason berth.

New York Giants have the most difficult remaining strength-of-schedule

Making the playoffs in the first year of his tenure as head coach is the dream for Brian Daboll. The New York Giants have shocked the world with Daboll at the helm. Big Blue’s 7-2 start might classify them as the biggest surprise in the NFL this season. The Giants rank seventh in the NFL in ESPN’s Week 11 power rankings.

With a 7-2 record, the Giants currently own the fifth seed in the NFL. The Giants have a one-game lead on the sixth seed and a two-game lead on the seventh seed. By all metrics and by comparing all standings, the Giants seem like a shoo-in for this year’s postseason. But there is still a lot of football left to be played on the schedule, and, unfortunately, no one’s schedule is tougher than that of the New York Giants.

Next week, the Giants have their easiest-remaining game on the schedule. Big Blue is hosting the Detroit Lions in Week 12 who currently sit near the bottom of the NFC with a 3-6 record. Winning this game will be crucial for Big Blue as it’s likely to be considered the last “gimme” on the schedule.

Other than the Detroit Lions, only one other team, the Indianapolis Colts (4-5-1), has a losing record on the Giants’ remaining schedule. The Giants will play Detroit, Dallas, Indianapolis, Minnesota, Washington twice, and Philadelphia twice to round out their 2022 schedule. Big Blue has to play five divisional opponents in their final eight games. Each one of these divisional games will be critical for the Giants as they look to chase the first seed in the NFC East, currently possessed by the 8-1 Philadelphia Eagles.

With a remaining strength-of-schedule of .633, no one has a tougher road to the playoffs than the New York Giants. The Giants have ground out some hard-fought wins this season. That trend will need to continue in order for Brian Daboll to lead the New York Giants to their first playoff appearance since 2016.