The New York Giants have something special in rookie safety 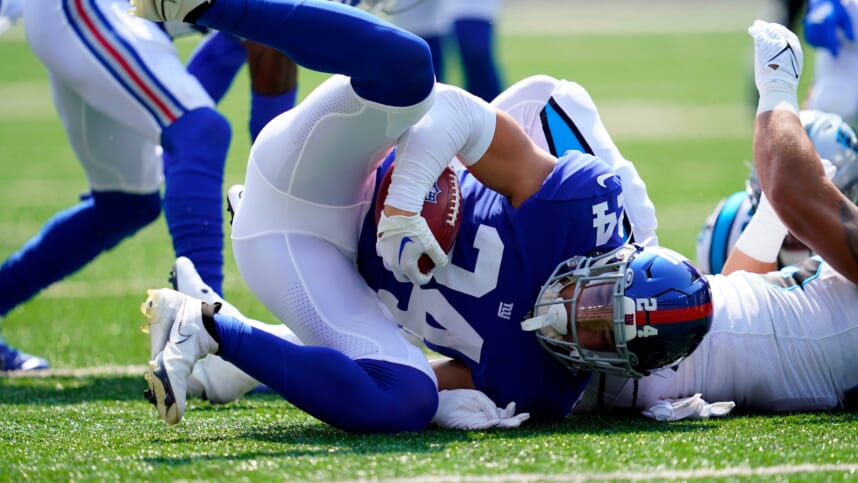 The New York Giants‘ 2022 rookie class has proven to be impactful. Big Blue has endured a slew of injuries in their secondary, losing cornerback Aaron Robinson for the season and placing star safety Xavier McKinney on injured reserve during their bye week. In the absence of McKinney, rookie safety Dane Belton has stepped up on defense. The New York Giants seem to have something special in Dane Belton.

The New York Giants drafted Dane Belton in the fourth round of this year’s draft. The rookie missed time during training camp and preseason with a collarbone injury but has recently seen increased playing time due to the placement of Xavier McKinney on injured reserve. Playing an expanded role in the Giants’ defense, Dane Belton has proven to be an impactful player that can handle the responsibilities of a starting role in an NFL defense.

Through eight games, Dane Belton has allowed zero touchdowns while playing 173 coverage snaps. Belton is the only rookie safety to not allow a single touchdown yet this season (NFL Rookie Watch).

Head coach Brian Daboll was impressed with what Dane Belton contributed in place of Xavier McKinney during the Giants’ Week 10 win over the Houston Texans:

Those guys are interchangeable, but Dane’s smart. That’s why we drafted him. We thought he was a good player, and he’s very intelligent. So, you’re always going to miss your captains, your really good players, like X is. But I thought throughout the week, Dane was practicing well. He was ready to go. We had no choice. That’s what we expect.

Brian Daboll on Dane Belton in Week 10 via Giants.com

Dane Belton understood the assignment and did not feel overwhelmed stepping into the starting lineup with McKinney sidelined. Belton said, “just coming in and filling that role and doing our job” was the goal on Sunday.

The New York Giants are forced to rely on Dane Belton for the foreseeable future. Xavier McKinney suffered a broken hand during the team’s Week 9 bye, landing him on injured reserve. The team is uncertain whether or not McKinney will be back in the lineup before the end of the regular season. Considering his performances in recent weeks, though, the Giants have every right to be confident in the rookie safety out of Iowa.

On the season, Dane Belton has started three games and played in eight. In those games, Belton has logged 23 combined tackles, 1 tackle for loss, 1 quarterback hit, 1 pass defended, 2 fumble recoveries, and 1 interception.

Dane Belton was known for being a playmaker during his time at Iowa and that trend has continued during his first year in the NFL. The Giants’ rookie just has a knack for getting his hands on the football. Belton is only ten weeks into his first NFL season and has already proven to be a quality starter on the New York Giants defense. While there is still room for Belton to grow, he will have plenty of time to develop as the starting safety on the back end of the Giants’ defense with Xavier McKinney out of the lineup.