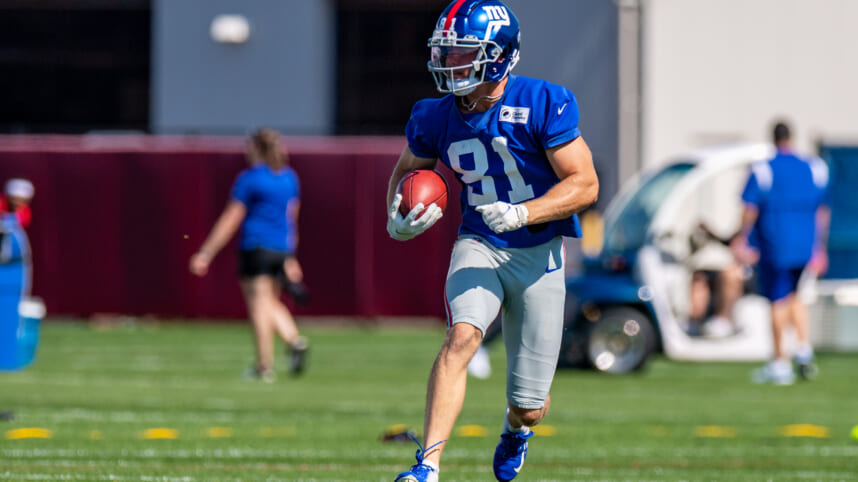 The New York Giants have a big decision to make at the wide receiver position as the preseason winds to a close. The Giants starters are locked into their respective positions on the depth chart. However, there is a serious summer competition that has been developing since the start of training camp. Many backup wide receivers are competing for roster spots, and all are making a strong case for themselves.

Kenny Golladay, Kadarius Toney, and Wan’Dale Robinson are all locks to make the Giants’ roster. Additionally, Sterling Shepard must be accounted for despite his current status on the PUP list. But behind this group are the likes of Collin Johnson, David Sills V, Alex Bachman, Richie James Jr., CJ Board, and Keelan Doss. Not all of these roster competitors will earn a spot, but selecting which players to cut will not be an easy decision for Joe Schoen, Brian Daboll, and the New York Giants.

Alex Bachman was the star of the show in the Giants’ preseason Week 2 victory over the Cincinnati Bengals. But will his heroic performance be enough to secure a roster spot? Bachman put up 11 receptions for 122 yards, and two touchdowns (including the game-winning score). He also made a key tackle on special teams. But as a third-team wide receiver, it might be difficult for Alex Bachman to rise the ranks and make it onto the roster in September.

New head coach Brian Daboll recently shed some light on his opinions regarding the status of the wide receiver battle. While fans are debating whether or not Collin Johnson and David Sills should make the final roster, Daboll seems to be debating how much playing time each wide receiver will be getting in the regular season, stating, “Collin Johnson, David Sills, they’ve stepped their game up. I mean they’re right in the mix. Not just to make a team but to play.”

Richie James Jr. is another player who has turned heads this summer. Richie has made some astounding plays in practice and also had a solid performance in the preseason debut against New England. The wide receiver totaled three receptions for 44 yards and one touchdown off of a killer route against the Patriots:

These four players could legitimately all make the roster this season. The Giants have had injury issues at wide receiver, so it would be wise to carry a couple of extra players at the position into the regular season. Additionally, Brian Daboll and Mike Kafka are known to spread the offenses out, which will require more dependency on the wide receiver position, making depth that much more important.

Then again, the likes of CJ Board and Keelan Doss could also put themselves into the mix. There are only so many wide receivers that the Giants can give roster spots to this season. Difficult decisions will need to be made, but this is a good problem for the New York Giants to have.