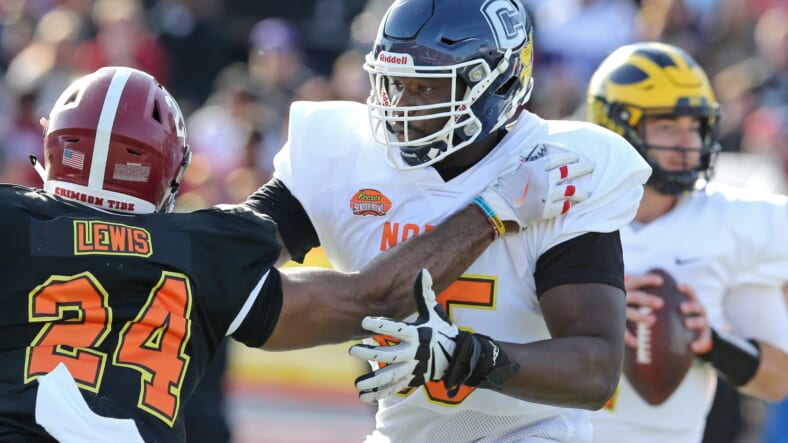 The New York Giants had a phenomenal start to the 2020 NFL Draft, here’s a look into their picks!

Going into the draft, there were plenty of rumors indicating the Giants could select an offensive tackle, trade back, land Isaiah Simmons, or even pick Derrick Brown, Auburn interior defender. Fast forward past the rumors, and Andrew Thomas was Big Blue’s glorious choice, and what he presents extends beyond our first glance.

Thomas is not only a foundational left tackle with elite traits, but the positional value he holds opens up the Giants’ salary cap for the future. He will essentially be on a rookie deal for five years, taking millions of dollars off the cap and giving the Giants freedom to sign elite pass rushers and other luxury additions to aid in reaching the playoffs.

What does Thomas bring to the team?

The former Georgia Bulldog left tackle is a force in the run game and thinkers down in pass protection. His mauler hands and core strength make it incredibly difficult for pass rushers to beat him on bull rush moves. His ability to mirror rushes and stand his ground makes him a quality pick and injection into the tackle spot. He is bit heavy-legged in getting to the second level, but when he does, there’s no stopping him from punishing defenders attempting to make the tackle.

One of my favorite aspects regarding Thomas is his desire for work. You will never see him standing still waiting for the play to unfold — he’s always trying to land a hit and help his team in every way possible.

In the second round, Big Blue secured Xavier McKinney, the No. 1 rated corner in the draft class. The Alabama product falling to the second wrote the story for the Giants, who saw him as an immediate improvement at free safety and a player who can move around the defense to feature in different roles. Defensive coordinator Patrick Graham loves his safety blitzes, and McKinney can be utilized well in his scheme. Expect to see plenty of three-safety looks in 2020 with Jabrill Peppers, McKinney, and Julian Love. This grouping will move around the defense as Peppers and Love can both interchange in FS and SS roles.

McKinney, though, is one of the best tacklers at the position out of the draft, and his game-speed is far more impressive than his dismal 40-yard dash time from the NFL Combine. Expect to see him flying around the field and acting as a ball-hawk/blitzer in specific setsâ€”another fantastic selection by Gettleman and Co. in the second round.

However, in the third round, the Giants landed Matt Peart, who has the potential to be a starting-level tackle in the NFL. This has to be the most underrated selection of the entire class, based solely on his physical traits and ability to jump to the second level in a hurry. Coming out of UConn undoubtedly comes with its developmental set-backs, but Marc Colombo can work his magic with a player like Peart.

If Peart can develop into the Giants’ starting right tackle for the future, this draft could be one for the history books.