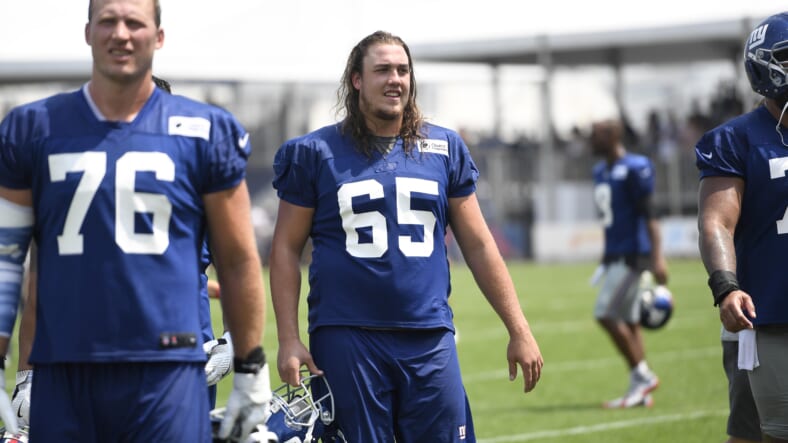 The New York Giants will face off against the Philadelphia Eagles in what will be a pointless game in week 17, for some, but for others, it could be the difference between earning starting money in 2020 or falling into the reserves. For offensive lineman, Nick Gates, he’s fighting for an opportunity to earn a starting spot on the line as right tackle Mike Remmers will inventively depart after his one-year deal expires.

As an undrafted free agent in 2018, Gates was brought to East Rutherford to develop his skills with the hope he would become a contributor down the line.

For Nick, though, he’s only trying to help the team succeed in any way he can, stating:

“I’m an offensive lineman,” Gates told NorthJersey.com. “I’ll play wherever I fit in, whatever spot opens up, and I’ll make the most of it. I’ve learned so much having to adjust to playing in different positions. I came into the league having played exclusively at left tackle, and then I played a little left guard before getting hurt last summer as a rookie. Learning how to play on the right side was really a muscle memory sort of thing, training your mind and body to follow through on the steps, with technique, just everything.”

Injecting Gates into every spot on the offensive line except for center has helped him learn the necessities. He performed well in a limited sample size at right guard and right tackle this year, further proving he can be an asset moving forward for Big Blue.

The New York Giants could stick with their homegrown talent:

If GM Dave Gettleman is confident in his progression, the Giants could easily slide him into the right tackle position, where he would earn a whopping $660K in 2020. Having a quality lineman for that low of a price is incredible, and the Giants would be smart to extend him before he hits the open market, given he proves to be of quality next season. The week 17 matchup against the Eagles, in which Remmers will be inactive, will provide Gates with one more chance to further impress the coaching staff.