The New York Giants could be in love with Jaelan Phillips, but he comes with major concerns 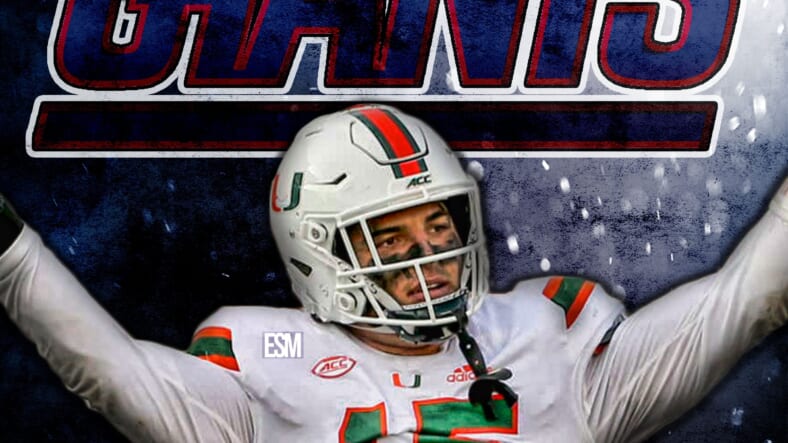 By all indications, the New York Giants feel strongly about this year’s pass rush class. While most believe that the 2021 NFL draft has a weak presence at edge rusher, the Giants have spent plenty of resources sending front office personnel to evaluate the options available with the 11th overall pick. In fact, they might be trying to eye a trade down, gaining value while also adding one of the best pass rushers on the board to their defense.

During a press conference on Thursday afternoon, general manager Dave Gettleman stated that he has considered trading down in the past, despite history telling us otherwise. He simply said that the value presented was not worth making a move, which forced him to stay put and make his original selection.

However, if the Giants really are enamored by one specific pass rusher in this class, there are two options that make the most sense. The first is Georgia stand-out Azeez Ojulari, who is a bit undersized but fits the Giants’ scheme to perfection as an outside linebacker. Alternatively, Miamiâ€™s Jaelan Phillips is also a stud who can play in the five tech and as a stand-up outside linebacker in the 3-4r base scheme.

Phillips is quite an incredible prospect but comes with serious baggage that could influence where he is drafted in just under a week. At 6’5″ and 258 pounds, Phillips is a former five-star recruit who has suffered a significant number of concussions, including ankle and wrist injuries. At one point, he accrued as many as four concussions in one season, which forced him to retire from football, but once he returned to health, he joined Miami and completely dominated in 2020. He posted 45 tackles, 15.5 for a loss, and eight sacks.

What would the New York Giants be getting in Phillips?

Phillips was not only one of the best edge rushers in college football, but minus his concussion issues, he might be a top 10 selection this year. With his versatility and ability to adapt to any scheme, he makes the most sense for the Giants, who love to get creative and utilize base packages and nickel formations. In the nickel, the Giants would use four down linemen, two linebackers, and five defensive backs. While a player like Ojulari might thrive as a stand-up pass rusher, Phillips can do both, making him more advantageous as an every-down pass rusher.

While I do believe he would be the ideal fit for the Giants’ scheme, especially with a reliance on man coverage next season after the acquisition of Adoree Jackson, the concussions represent a major concern. There is a belief that a few more concussions could result in him developing serious headaches, which could make his future in the NFL problematic. Weâ€™ve seen what concussions can do to players in the past, especially with sterling Shepherd, who was forced to miss months of football.

If the Giants evaluate Phillips and find that his medical checks out clean, he wouldnâ€™t be as much of a risk at the NFL level, especially after learning better fundamentals and ways to avoid taking shots to the head. I do think he has the most upside of any pass rusher in this draft class, but ideally, he would be acquired in a trade-back scenario, not at 11, especially with elite prospects on the board with a minimal injury history.