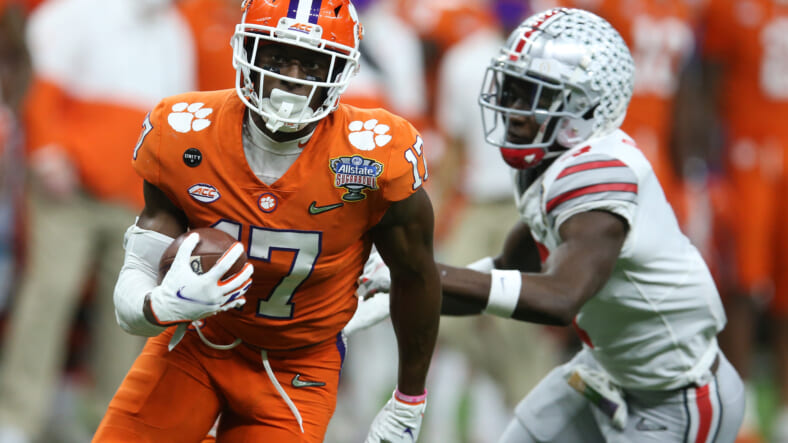 The New York Giants are looking for offensive playmakers this off-season, and the expectation is that they will look toward free agency and the NFL draft to find their solutions. With an extremely deep wide receiver class, options like Jaylen Waddle, Rondale Moore, Terrace Marshall, and much more represent opportunities to inject weapons into the offense and give quarterback Daniel Jones a sense of security.

However, thereâ€™s no guarantee the Giants will allocate the 11th overall pick toward the offense, especially if elite prospects like Micah Parsons fall to their selection. Thereâ€™s always a possibility they go after a player like Caleb Carly or Patrick Surtain, two cornerbacks that would solidify the CB2 position and give Big Blue a top 10 defense in the NFL.

Come the mid-rounds, the Giants can find ample value, and one player that stands out is Clemson receiver Cornell Powell.

Powell is a late bloomer, as he did not catch more than 15 passes in any season from 2016 to 2019. His 2020 campaign, though, was extravagant, as he posted 882 yards and seven scores over 12 games. His development finally took shape, as he flashed exciting potential with his route running, ball skills, and ability after the catch. While he took quite some time to make an impact at Clemson, he is a developmental receiver that could find his way into the starting unit quickly.

Where should the New York Giants target Powell?

The Clemson receiver is a third-round option for the Giants, in my book. While his sample size is limited to just one season of adequacy, he dominated the Senior Bowl and showed great route running in man coverage, as you can see in the clip below.

#Clemson WR Cornell Powell with an absolutely beautiful release to connect with #TAMU QB Kellen Mond at the #SeniorBowl pic.twitter.com/9vgDhej9rm

Utilizing an outside release with a jab step to the boundary, Powell creates significant separation on a quick slant route toward the middle of the field. While NFL defenders will be more physical and aggressive at the point of attack, Powell showed he has the ability to hand fight and win matchups.

While I wouldnâ€™t project Cornell as a starting receiver in the NFL immediately, he is a player that has high upside with solid athleticism and hands. Schematically, I believe he would fit the Giants well, given his short-yardage abilities and intermediate route running (16.6 yards per reception).

Nonetheless, drafting Powell simply isnâ€™t enough to upgrade the offense, which shouldnâ€™t deter the Giants from allocating a premium draft pick toward a playmaker.