The Giants might have something special in rookie outside linebacker 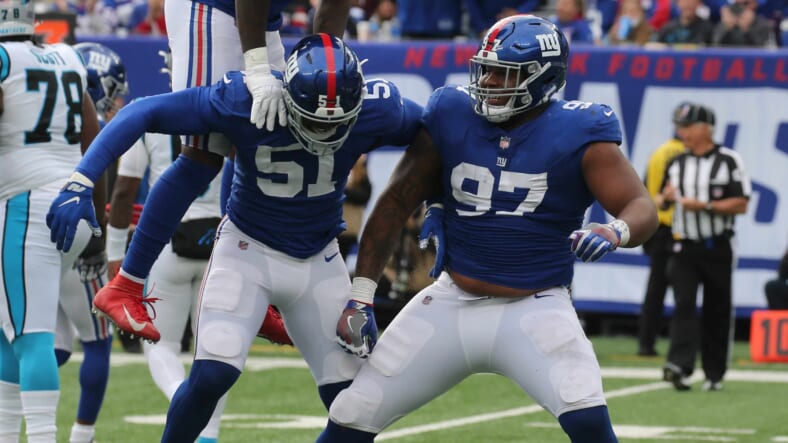 The New York Giants emerged victorious over the Carolina Panthers in a surprising turn of events in Week 7. After being demolished by the Los Angeles Rams in Week 6 at home, the Giants bounced back in a strong way, holding the Panthers to just three points.

Despite starting off slow, the Giants pulled away in the fourth quarter, scoring 13 of their 25 points, courtesy of two field goals by Graham Gano and a touchdown run by Devontae Booker to put the game out of arms reach for Carolina.

However, the performance of the defense stood out as a catalyst in the victory, holding quarterback Sam Darnold to just 111 passing yards and 56 total rushing yards on the afternoon.

Finally, Patrick Graham and his defense stood their ground, despite Carolina struggling the past few weeks. The Panthers have lost four consecutive games, but being held to three points was a new low for a team that scored 28 last weekend against the Minnesota Vikings.

One key factor for the Giants was rookie outside linebacker Azeez Ojulari, who dominated in one of the best performances of his young career. Ojulari posted five tackles, 2.5 sacks, three tackles for loss, and four quarterback hits.

Ojulari currently ranks as the top rookie in the sack department with 5.5 and is on pace for 13 sacks this season, the most any Giant has enjoyed since 2011.

With the pass rush struggling the past few weeks, Azeez presents a player with substantial upside. As a rookie, seeing this type of growth and production should excite fans, especially if the team can add another high-end option opposite the Georgia product in next yearâ€™s draft.

In addition to Ojulariâ€™s improved pass rush, his ability to seal the edge in the run game has also taken a step forward. Three tackles for loss proves that he enjoyed success beating offensive linemen and shedding blocks to make tackles in the backfield.

If he can continue to grow and produce, the Giants will have a fantastic young player to work around. Big Blue will begin to prepare for a Week 8 showdown against the Kansas City Chiefs at Arrowhead.