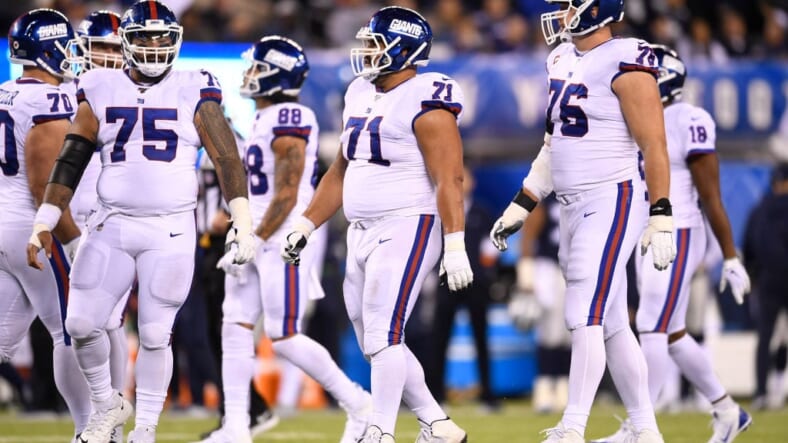 There are three major takeaways from the New York Giants‘ draft class:

There are several clear trends the Giants followed in the 2020 NFL draft, and some would say this was one of the best draft classes they’ve seen in years from Big Blue.

They manage to solve positions of absolute need while also providing an influx of talent in the later rounds to spur competition.

General manager Dave Gettleman and head coach Joe Judge did a fantastic job piecing together a team that had holes all over the defense and offensive line. Gettleman made it a priority to solve the offensive line once and for all, while Judge stated they were trying to build a team and not a group of 53 independent contractors.

Both Gettleman and Judge needed to have a successful draft despite the virtual reality aspect. After rounds one and two, the Giants began piecing together the depth of the team. Ultimately, you cannot have multiple first-round picks to solve problems with a high probability rate, so finding high upside players who can compete right off the bat is sometimes the best alternative.

That is where the Giants began their quest to build a team and not a group.

The three takeaways that we can derive from the Giants’ latest draft class begins with the offensive line. After years of neglect and inadequate talent allocations, Big Blue has seemed to found the answer in left tackle Andrew Thomas finally.

A sturdy, strong player who has a serious mean streak will likely supplant Nate Solder on the left side. This gives Daniel Jones a considerable boost in the pocket and opens up running lanes for Saquon Barkley. A home run pick for the Giants, and that wasnâ€™t the end in of trench allocations.

In round three, the Giants landed Matt Peart out of UConn, an extremely talented player with high-upside. He has the potential to develop into a starting right tackle, which would be the best-case scenario. If Gettleman managed to land a starting LT and RT in one draft, not only will the team’s salary cap be extremely healthy, but they will have achieved a rare feat.

Another significant take away was the allocation of players toward the slot corner position. The Giants drafted UCLA corner Darnay Holmes in the fourth round, and while he has minimal experience as a nickel CB, he has the perfect size and strength to play the position.

His elite quickness and speed allow him to match up with interior receivers well in the NFL, and he was one of the highest-ranked nickel corners available in the draft. They also landed Minnesota corner Chris Williamson in the seventh round, who has great physical traits but lacks the fundamentals to be an immediate impact player. With a year or two of refinement, he could develop into a useful talent, creating more competition in the slot.

The last trend that we noticed was a major influx of linebackers. The Giants drafted outside linebacker Cam Brown from Penn State, outside linebacker Carter Coughlin from Minnesota, inside linebacker TJ Brunson from South Carolina and Tae Crowder from Georgia. All of these new linebackers will likely turn over the depth at the position and allow competition to brew on the backend. Clearly, the coaching staff did not feel confident with their depth linebackers and needed to re-tool the reserves.

Overall, the Giants did a fantastic job building out the depth on their defense and also allocating assets toward the offensive line. Not to mention grabbing first-round value pick Xavier McKinney in the second round, they have multiple immediate starters who can leave their mark in 2020.