Should the New York Giants try to trade for EDGE Chandler Jones? 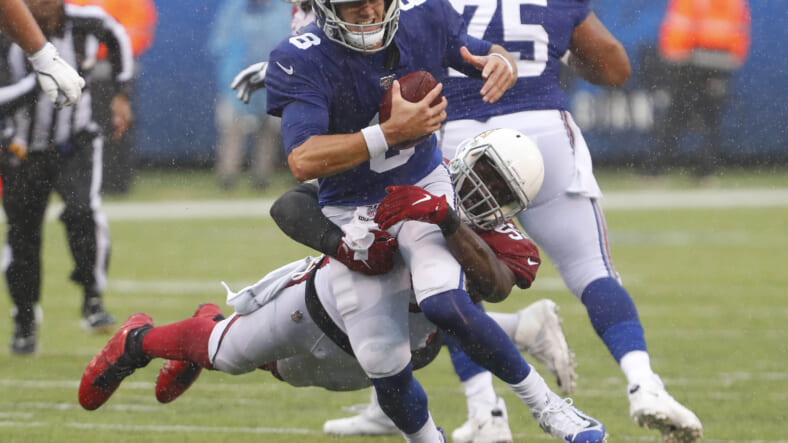 The 2021 NFL offseason is gearing up to be one of the wildest offseason periods in the history of the sport. Numerous star players are set to hit the free agent market, but many other stars could be on the move via trade. Stars like Deshaun Watson, Russell Wilson, and others have been brought into trade rumors.

The New York Giants are a team that will likely be shopping for a stud player in the free agent market. The Giants showed a lot of improvement in 2020, finishing 6-10, just one game away from a playoff berth. But it is evident that the Giants still need a few more pieces on their roster. Offensively, the Giants are making it a point of emphasis to find a playmaker for Daniel Jones. But the defense could use some help, too.

Amongst the star players having their name brought up in trade rumors is one interesting defender in the desert that the Giants might want to inquire about. Arizona Cardinals premiere edge rusher Chandler Jones could be a potential trade or cap casualty this offseason. If Jones is available for trade, he could be a perfect addition for the New York Giants.

The Arizona Cardinals do have a fair amount of salary cap space entering the 2021 NFL offseason. However, they do have some impending free agents that will eat up that cap space if they re-sign them in the offseason. One player that might command a lucrative contract is Haason Reddick. Reddick is the edge rusher that played opposite of superstar Chandler Jones.

Unlike Chandler Jones, Haason Reddick is a young player that really has yet to hit his ceiling. At 26 years old, Reddick has plenty of room to grow as a premiere edge rusher in the NFL. The Arizona Cardinals could prioritize paying him as opposed to continuing to pay Chandler Jones who is now 30 years old and has a salary cap hit of over $20 million in 2021.

Reddick’s contract likely would not hit that annual average. Reddick might come at a cheaper price for a longer time span and a higher ceiling for the Cardinals. Additionally, trading or releasing Chandler Jones would free up over $15 million in salary cap space for Arizona. This potential influx of cap space could entice the Cardinals to move on from Jones and build around Reddick.

Why Chandler Jones might make sense for the Giants

The New York Giants’ defense was the strength of the team in 2020. Their secondary played at a high level and their interior defensive line excelled against both the run and the pass. However, that is not to say there were no weaknesses within Patrick Graham’s defensive unit.

The Giants’ pass-rush was solid last season, but they did lack a true, consistent edge presence. Chandler Jones could fix that. Chandler Jones was injured in 2020, playing only 5 games, his first season playing less than 15 games since 2014. Jones only recorded 1 sack in those 5 games, but he has been one of the top defensive players in the NFL over the last half decade.

If the Giants traded for Chandler Jones, he would bring a pass-rushing threat off the edge that the Giants have not had in years. Jones would instantly be in contention for the Giants’ best player upon his arrival. He is a turnover-creating machine as well, recording 17 forced fumbles in his five seasons with the Cardinals, along with a league-high 8 forced fumbles in 2019.

Trading for Chandler Jones would not be cheap for New York. They would likely need to give up at least a mid-round draft pick. Plus, the Giants’ cap situation is not exactly ideal, so they would need to restructure and extend Chandler Jones’s contract as part of the deal. But one mock trade for Jones could involve Evan Engram and a mid-round pick in exchange for Chandler.

This is truly a pipe dream for the New York Giants. But a move like this could take the Giants’ defense to the next level and fix a major weakness. But would New York be willing to sacrifice the assets necessary to obtain Chandler Jones and his elite talents? Jones will not come cheap. But at the very least, this is something the New York Giants should explore entering the 2021 offseason.