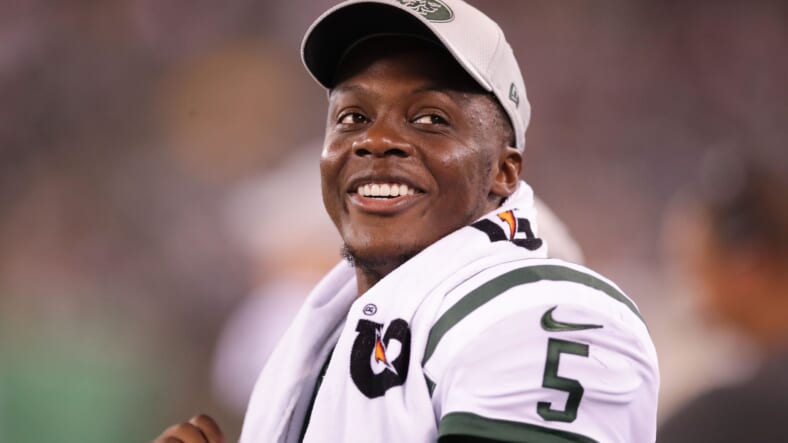 Some might think trading for New York Jets quarterback Teddy Bridgewater would be a good idea for the New York Giants, but for most, it would be a terrible mistake. The former Vikings and Pat Shurmur product is returning from a devastating knee injury that ended his 2017 season before it even began. This was after signs of true progression from the young signal caller, and he’s showing what he’s capable of with the Jets.

Being that Gang Green recently drafted Sam Darnold in the first-round, Bridgewater is expendable – he might even make a good trading piece. The problem for the Jets is that he’s only signed for one season, so waiting it out would be in the best interest of Teddy.

But, the question I propose is: Should the Giants consider signing him in 2019 to replace Eli Manning?

This question relies solely on the confidence Shurmur has in Davis Webb, and even Kyle Lauletta to a certain degree. If he believes Webb is capable of leading the offense to success, he will not blink an eye in Bridgewater’s direction, but if he has any doubts, we could see a massive shakeup at the quarterback position for the Giants.

Let’s do a little breakdown:

Teddy Bridgewater avoids the rush and converts the first down pic.twitter.com/yu3fzKbmeS

In this play, you can see Bridgewater step back in the pocket, feel the pressure, avoid it, and hit a receiver without taking any time to scan the field. This play alone displays high-end vision, mobility, and pocket presence. One of the more observational aspects of Teddy is that he’s become more of a pocket passer. While he was never one to take off on the run at any moment, he seems more comfortable hanging back in the pocket and using his mobility to remain an active thrower and not a runner.

His ability to throw first and not rely on his instincts to run will allow him to prolong his life as a quarterback in the NFL, and ultimately make him more attractive for teams wanting to take a flier on him.

For the Giants, he would fit perfectly within Shurmur’s scheme, as he’s accustomed to his style and learned a great deal from the new head coach for Big Blue. If the stars were to align between the two, it would most certainly put Webb on the back-burner, and in the end, it could be for the best. Another factor to be considered would be his salary-cap hit.

Bridgewater might draw serious interest next season for QB needy teams, and his stock could rise to the point of a $12-15 million per-year contract.

What are your thoughts?