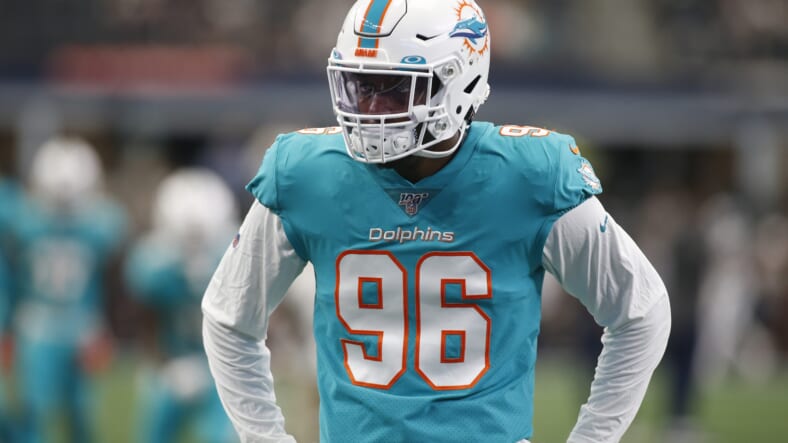 Taking a look at Taco Charlton and if the New York Giants should pursue him in free agency:

After a short stint with Miami in 2019, former first-round selection by the Dallas Cowboys, Taco Charlton, has been waived by the Dolphins. Having logged five sacks last season with Miami and his obvious familiarity with Giants’ defensive coordinator, Patrick Graham, there is a connection that could result in some interest by Big Blue.

The Dolphins have waived DE Taco Charlton, a Cowboys first round pick in 2017. He had 5.0 sacks this past season.

Charlton struggled in his first two seasons with the Cowboys as a defensive end, tallying just four total sacks. Taco is a bit too big to feature as an outside linebacker in the 3-4 scheme, the expected scheme for the Giants. However, Graham could plan to implement a mesh of 3-4 and 4-3 but predominantly will utilize the former. It could open up the idea of adding the former first-rounder who clearly has untapped potential based on his sack total in just five started games last season.

It seems as if Graham brought the best out of Charlton and could utilize him with Big Blue in 2020, despite his 6-foot-6, 270-pound frame. With the Giants desperately needing more pieces to add to the pass rush unit, Charlton could provide value as a rotational piece or scheme-specific player. He would count less than $2 million against the cap if picked up.

Where do the Giants currently sit with the OLB position?

At the moment, Graham is a bit thin at edge rusher, unless Markus Golden ends up sticking with the Giants for 2020 on the FA tender. That would guarantee 110% of his 2019 salary, meaning he would only count about $5 million against the cap for next season. Adding a double-digit sack producer for $5 million is fantastic, and considering his familiarity with the team and 2019 rookies, it would be beneficial.

Aside from Golden, the Giants still have Lorenzo Carter and Oshane Ximines, with the latter of the two preparing for an improvement in 2020. Ximines posted 4.5 sacks on just 45% of defensive snaps. Factoring in the expectation of improvement, Ximines could post double-digit sacks next season, which would give the Giants a solid foundation to build around at the position.