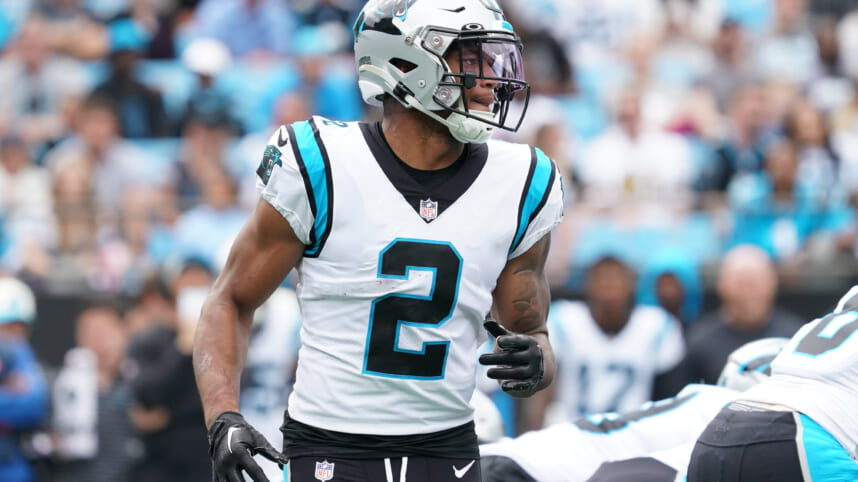 The New York Giants‘ offense is getting by despite the lack of talent and depth on offense. The Giants are down to the bottom of their depth chart in wide receiver talent. Darius Slayton started the season as a healthy scratch, but in Week Five he was Daniel Jones’s primary receiving threat. Across the NFL, there are opportunities to attempt to upgrade the receiving corps. One new name to add to the mix is Panthers wide receiver DJ Moore. The Panthers are reportedly looking to trade some players in an effort to stockpile future draft picks for their rebuild (Jay Glazer). Star wide receiver DJ Moore could be a target for teams looking to bolster their offense, and the Giants could inquire about the talented vertical threat.

In each of the past three seasons, DJ Moore has eclipsed 1,000 receiving yards. Acting as the primary receiver in the Panther’s offense, Moore quickly rose to prominence in Carolina during his 2019 sophomore season. This year, however, Moore has not thrived the way he has in years past.

Through five weeks of the 2022 NFL season, DJ Moore has only totaled 17 receptions for 197 yards and one touchdown. The Carolina Panthers just recently fired their head coach Matt Rhule and much of his staff as the team gears toward a reboot and rebuild. Moore is not playing his best football, though, that is likely a product of his environment. Maybe a change of scenery would benefit DJ Moore and allow him to return to form.

The New York Giants could capitalize on the opportunity presented in Carolina. DJ Moore would instantly step in as a massive improvement for the Giants’ offense. Kenny Golladay, Kadarius Toney, and Wan’Dale Robinson are all hobbled with injuries while Sterling Shepard’s ACL tear will keep him out for the rest of the season. New York could benefit from an influx of receiving talent.

DJ Moore is coming off of a 2021 season where he totaled 1,157 receiving yards and four touchdowns. However, a player of this caliber gets paid handsomely. DJ Moore’s cap hit this season is roughly $6M, however, it balloons to a total of $25M next season, then $20M for the following two years. This will be a massive barrier to acquiring Moore’s talents for the cap-strapped New York Giants. He might be an instant upgrade and improvement for the Giants’ roster, but trading for DJ Moore would be easier said than done considering the contract that comes along with the player.