Should the New York Giants inquire about Broncos WR Jerry Jeudy at deadline? 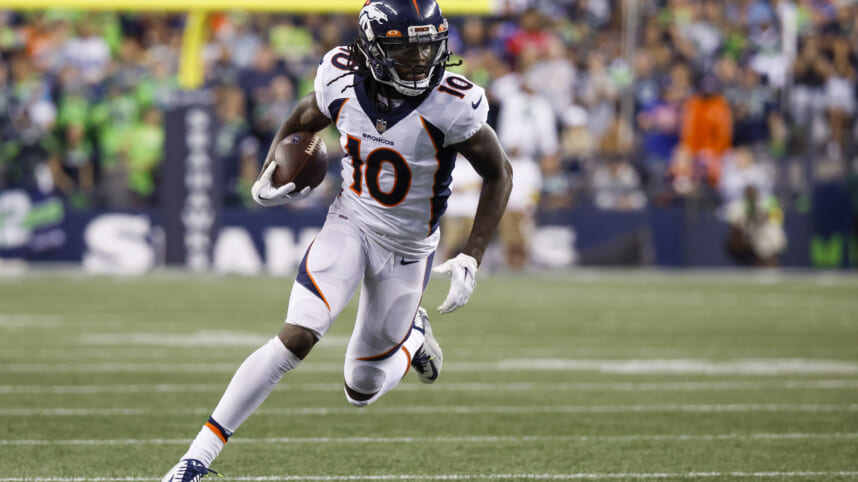 The NFL trade deadline is rapidly approaching. The deadline takes place at 4 p.m. EST on November 1, so if the New York Giants want to make any moves, they will need to get to it as soon as possible. The Giants are playing on offense with a severe lack of depth and receiving talent. One exciting name has popped up in recent trade rumors: Jerry Jeudy. The Denver Broncos are struggling and their 2020 first-round draft pick could be ready for a change of scenery.

The New York Giants could use more receiving talent and the Denver Broncos could be shipping off some receiving talent. Jerry Jeudy could provide a boost to the Giants’ offense if the team were to acquire him via trade.

Should the New York Giants trade for Jerry Jeudy?

Denver Broncos wide receiver Jerry Jeudy has become a popular name in trade rumors. The 2-4 Broncos could move the receiver for the right price as he looks to escape Russell Wilson and Denver’s struggling offense. After being selected with the fifteenth overall pick in the 2020 NFL Draft, Jerry Jeudy has struggled to make a name for himself with the Broncos. Perhaps a different team and a different coaching staff could finally help Jeudy realize his potential.

With Kenny Golladay and Karadius Toney injured and unlikely to make a quick return to the lineup, the New York Giants could take a flier on Jerry Jeudy to give Daniel Jones a reliable receiving option. Jeudy has proven to be a quality receiver in the past, though he has been held back by injuries and poor quarterback play throughout his career. Jeudy’s frustration appears to be mounting, too, as demonstrated by this clip of him on the Broncos’ sideline:

Jerry Jeudy’s 2022 season got off to a hot start with a four-catch, 102-yard, and one-touchdown performance against the Seahawks. Since then, though, Jeudy has not topped 100 receiving yards in a game and has only scored one more touchdown. The Broncos seem to be squandering what could have been a breakout year for their 2020 first-round draft pick.

In his 2020 rookie season, Jerry Jeudy was able to manage an impressive total of 856 receiving yards and three touchdowns. He suffered a season-ending injury in Week 10 of the 2021 season, but is back and healthy now. Jerry Jeudy is a shifty receiver with elite route-running skills. He has the ability to create space and get himself open. He could be a perfect fit in the New York Giants’ offense as Daniel Jones searches for reliable receivers to connect with.

The Giants would likely need to clear some cap space to make the trade work, though, as Jerry’s contract carries a cap hit of over $4 million. But there is no doubt that the Giants would be upgrading their receiving corps by acquiring Jerry Jeudy’s talents. A move for Jeudy is one the Giants should absolutely consider if the price is right.