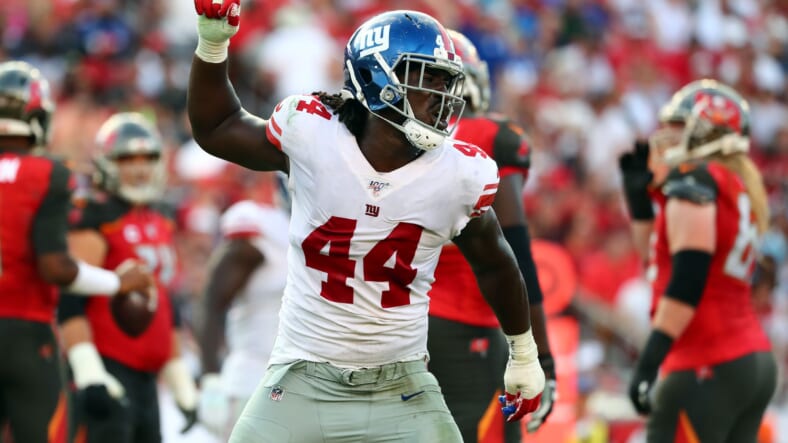 One thing the New York Giants have lacked this year is an elite pass-rusher who they can depend on to disrupt opposing quarterbacks and help stop the run. Free-agent pickup Markus Golden has been their best pass-rusher by far, logging 6.5 sacks and 15 QB hits through 10 games.

Golden’s ability to get into the backfield and force early passes has been a significant help for the 27th ranked Giants defense, but the secondary has been so weak his efforts have gone to waste. Pairing Golden with another premium-level pass-rusher would help take some of the pressure off and allow him to work in 1v1 situations with offensive tackles.

Opposing offenses have planned around Golden and provided help to slow him down in early-down sets. Because defensive coordinator James Bettcher has dialed down his blitz percentage, he has relied on Golden to pick up a majority of the slack.

Bettcher’s usual blitz-heavy scheme has been tamed, primarily at the expense of a disastrous secondary who has failed to work off of a solid push in the trenches and lack of talent at the linebacker position. Their inability to cover crossing routes and the deep ball has seen the Giants defense plummet every single week.

Extending Golden might not be the worst idea, especially considering the value of quality pass-rushers in today’s market. Given Big Blue manages to grab a top-level outside linebacker in the 2020 NFL Draft, like Chase Young or Yetur Gross-Matos, having Golden to pair with either would provide exponential value on the defensive line.

Imagining Golden, Young, Dalvin Tomlinson, Dexter Lawrence, and Leonard Williams up front gives me chills, and I can’t imagine a quarterback feeling any different. This unit would immediately become one of the league’s most feared, but it’s about retaining strong-points and not letting them walk in free agency.

Both Golden and Williams are due for big contracts — they will probably land in the $12-14 million range this upcoming offseason. It will be interesting to see general manager Dave Gettleman’s approach towards finalizing the trenches on the defensive side of the ball.