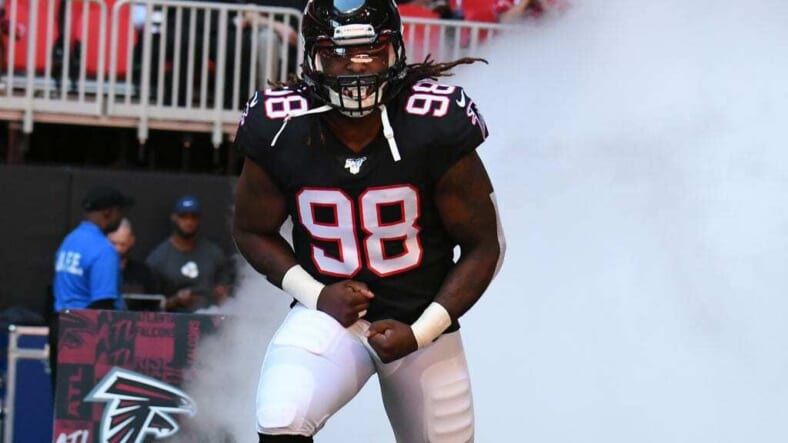 ATLANTA, GA – OCTOBER 27: Atlanta Falcons Defensive End Takkarist McKinley (98) sprints onto the field before the NFL game between the Seattle Seahawks and the Atlanta Falcons on October 27, 2019, at Mercedes-Benz Stadium in Atlanta, GA.(Photo by Jeffrey Vest/Icon Sportswire via Getty Images)

After the New York Giants fell to the Tampa Bay Buccaneers in week 8, they hit the waiver wire to claim wide receiver Dante Pettis, who was released by the San Francisco 49ers.

Pettis is a troubled player who simply lacked motivation and came to camp overweight in 2019. His opportunities have quickly taken a backseat, but the Giants and head coach Joe Judge will look to extract the potential they know is still available.

Surprisingly, another quality player has hit waivers, and this time it is a first-round talent pass rusher, Takkarist McKinley, formally of the Atlanta Falcons.

McKinley was having trouble in Atlanta, having run-ins with management, forcing his way off the team, and changing his scenery. The Giants may offer him a fresh opportunity to extract his potential and possibly earn a second contract. The Falcons declined his fifth-year option, so he will be a free agent at the end of the 2020 campaign, which might bode well for the Giants, who could retain him on a cheaper deal.

What would the New York Giants be getting in Takk?

McKinley, who has played in just four games this year, stands at 6-foot-2 and 265 pounds. He has eight total tackles, one sack, five quarterback hits, and one batted ball this year. He is quite solid across-the-board, offering good run defense and pressure on the quarterback. Considering he wasnâ€™t in the best situation and probably lacked motivation, the Giants might be able to find his potential and display it on the football field.

Joining a defense that has played above their weight class this year might help McKinley, but the only issue is he plays primarily defensive end, so he would have to adapt to an outside linebacker position. Then again, defensive coordinator Patrick GrahamÂ is very good at adapting players to his scheme and might be able to fit McKinley in one way or another.

It couldnâ€™t hurt to kick the tires on the former first-round pick, who is extremely talented but simply wasnâ€™t a fit with the Falcons. Transitioning to OLB might also be beneficial, as his size indicates he could be a good fit. Considering Kyler Fackrell is 6-foot-5 and 245 pounds, McKinley should offer some talent that could revitalize their pass rush.

Acquiring him would likely make him the Giantsâ€™ best pass rusher immediately, and it is another low risk, high reward scenario that they likely view as an opportunity. However, since the Giants did add Pettis, their waiver spot might not allow them a priority selection. They will have to hope other teams pass on him for miscellaneous reasons.