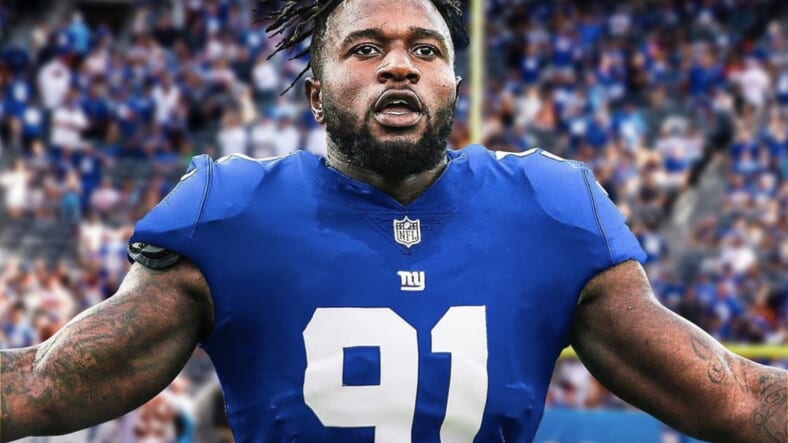 Rumors have linked the New York Giants to Jacksonville’s Yannick Ngaokue. Should they dive into the pool?

The Giants did very little to strengthen their pass rushÂ this offseason, seemingly passing on retaining Markus Golden and allocating cap toward only one free agent pass rusher. Kyler Fackrell, who recorded 10.5 sacks in 2018 while Patrick Graham was his linebackers coach, was the Giants’ player of choice to fill the void. The former Green Bay Packer is on a one-year deal, attempting to prove his worth and lure a more attractive, multi-year contract his way in 2021.

However, signing Fackrell doesn’t solidify the pass rusher unit, which is where the rumors involving Ngakoue have bubbled to the surface. According to Adam Shefter, there have been talks between the Giants and Jaguars, but the only deal that makes any logical sense would be to send the 4th overall pick for Jacksonville’s 9th pick and Yannick.

CHECK OUT OUR INTERVIEW WITH JULIAN LOVE!

This would be a poor usage of cap space and a premature move, considering the Giants are not in a position to give up ample cap during a complete youth rebuild. The upcoming NFL Draft represents a lot more to the rebuild than trading back for a high-priced player who will have minimal impact in the grand scheme.

Unless Big Blue gain more draft capital in a trade-back scenario, they should stay put and select the best player available, given it’s Isaiah Simmons or Chase Young. There’s always a possibility the Giants invest in an offensive tackle to protect Daniel Jones for the foreseeable future.

Ensuring the team is moving in the right direction should be the priority. With only $17 million in cap space and about $6-7 million allocated to rookies, the Giants would be strapped of cash going into the 2021 season. Now is the time to be frugal and build for the next two years and not make impulsive, high-priced moves.

Also, it’s important to note that the Jags have Yannick on the franchise tag, and they’re asking for a lot in return. Waiting out the duration of 202 and signing him in 2021 to a multi-year deal might be a more calculated risk.

Objectively, Ngakoue offers a massive upgrade at the position and allows the Giants to draft an offensive tackle in the first round or a player like Isaiah Simmons, completely overhauling the defensive unit. Protecting Daniel Jones and opening up more running lanes for Saquon Barkley is equally as important, suggesting that GM Dave Gettleman can kill two birds with one stone in a potential trade with Jacksonville.