Should the New York Giants be worried about their wide receiver corps? 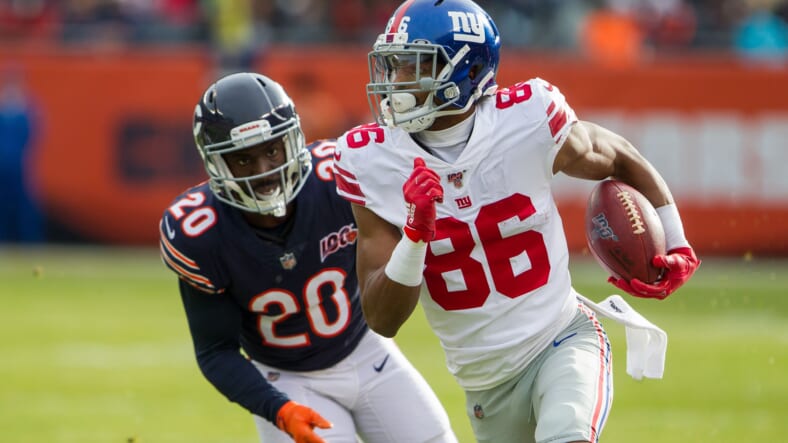 A look at the New York Giants’ wide receiver corps and if we should be worried about them in 2020:

On paper, the New York Giants seem to have an adequate wide receiver corpse composed of veterans and new faces. They have a blend of slot receivers and boundary options that can make plays and extend drives.

However, none of them are categorized as elite, which reflects back to the Odell Beckham Jr. trade and how general manager Dave Gettleman supplemented his loss. Gettleman went out and signed Golden Tate, to a four-year, $37.5 million deal.

Following the 2020 season, Tate will be 32 years old and have a potential out in his contract. The Giants can cut him for a $5 million dead cap hit. Otherwise, they can retain him and pay him $11 million in 2021. Saving $6 million might be beneficial for the Giants who could look to add a better wide receiver in free agency or the NFL draft.

While Tate has been productive in some areas, he missed four games last season due to a PED suspension. He tallied 676 yards and six touchdowns, the most scores he has earned since 2015. However, his catch rate was the lowest it has been since his rookie season in 2010 (57.6%). He dropped three passes last season, notably against the New England Patriots in which he scored the first receiving touchdown against their defense through six weeks.

Aside from Tate, the Giants also have Sterling Shepard, who they signed to a four-year, $40 million deal in 2019. Shepard played in just ten games, suffering two concussions that have put his career at risk. He earned his lowest yards total through four seasons and scored three touchdowns on 83 targets. Shepard is a consistent receiver with solid hands, but if he sustains another concussion, he could be forced out of the game prematurely. One wrong move and the Giants could be without another talented pass catcher.

Looking to the outside, the Giants have second-year player Darius Slayton covering the position. Slayton had a stellar rookie campaign, earning 740 yards and a touchdown, leading the team in both areas. He only dropped 2.4% of his attempts, showing off solid hands after a problematic rookie minicamp. His 57.1% catch rate was a little low, and he could use an uptick in that category, but he showed the potential to be the Giants’ top wide-out for the foreseeable future. His chemistry with quarterback Daniel Jones will prove to be essential moving forward.

Overall, the Giants have a decent wide receive a corps going into 2020, but Shepard is on the verge of a career-ending injury, and Tate is not the same player he once was. A lot of expectation is riding on Slaton to produce and see a big jump in his second year, but I believe the unit in 2021 will be a bit different.