Should the Giants take a flier on 1st round OT Alex Leatherwood off waivers? 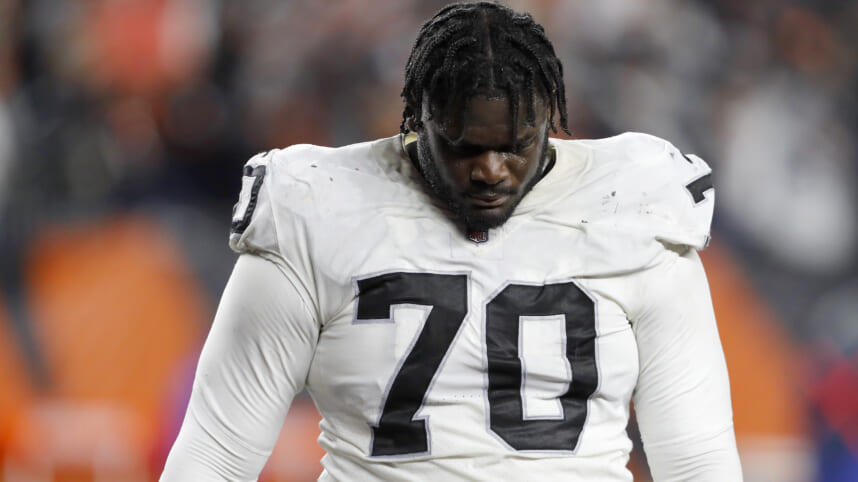 Today was an important day in the NFL as the deadline was met for teams to trim their rosters down to 53 men. The New York Giants cut their roster down, exposing the weaknesses and lack of depth that Big Blue has in some areas of their depth chart. One of the positions that could use reinforcements is backup offensive tackle. Behind Andrew Thomas and Evan Neal, the depth is scarce and the injuries have been abundant this summer. To the surprise of many, a former first-round offensive tackle was waived by the Las Vegas Raiders today. Alex Leatherwood, the 17th-overall draft pick in last year’s draft, will find his way to the waiver wire. The Giants could consider putting a claim in on Alex Leatherwood to acquire tackle depth.

The Las Vegas Raiders are eating over $7 million in dead cap space today after waiving 2021 first-round pick, Alex Leatherwood. The Raiders drafted Leatherwood in the first round of last year’s draft despite a mid-round projection from most analysts. The surprising pick quickly proved to be the wrong selection as the Raiders decided to move on just one year later.

Alex Leatherwood was pitiful in his rookie season. As a rookie, the Alabama product gave up eight sacks, 17 quarterback hits, and 40 hurries. He failed to establish himself as a quality starter as a rookie, but many are surprised to see the Raiders give up on the 23-year-old before he enters his second season. Perhaps a change of scenery and new coaching staff could help develop Alex Leatherwood into a player of quality. Coaches will love to work with Leatherwood’s intangible traits as he possesses a six-foot-five, 315-pound frame. Leatherwood plays with power but needs technical refinement in order to find success in the NFL.

Despite his poor performance as a rookie, Leatherwood does have intangible traits that teams may be willing to take a chance on. The Giants could take a flier on Leatherwood and hope to develop him into a quality backup. Depth is a need for Big Blue. While Leatherwood might not be reliable for a starting job, New York could attempt to utilize his talents as a swing tackle, backup tackle, or even convert him into a guard.