Should Giants trade for Buffalo Bills running back Zack Moss? 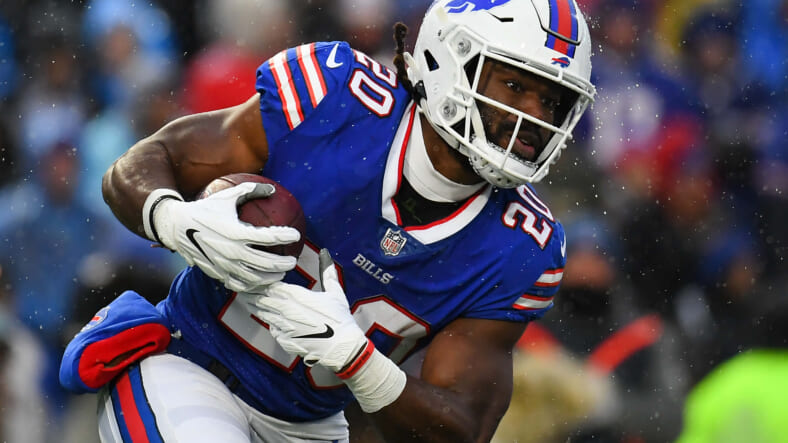 The New York Giants spent the 2022 offseason overhauling their offense. New York brought in a new coaching staff while also upgrading the talent on the roster. The Giants could afford to add more depth to their roster, though. Star running back Saquon Barkley is hoping for a bounce-back season. However, Barkley has an extensive injury history. The Giants could afford to add some talent behind Barkley on the depth chart. Zack Moss is a Buffalo Bills running back that could find himself on the trade block this summer. His connection to head coach Brian Daboll could make him a considerable candidate for the New York Giants.

The Giants hired Brian Daboll as their next head coach this offseason. Previously, Daboll worked as the offensive coordinator of the Buffalo Bills from 2018 to 2021. The Bills often utilized a dual-rusher backfield featuring Devin Singletary and Zack Moss. However, Buffalo drafted James Cook in the second round of this year’s draft, casting doubt on Moss’s future upstate. If Moss were to be traded, the Giants make sense as a potential landing spot.

Why Zack Moss makes sense for the Giants

The New York Giants could afford to add some depth to the running back position. Saquon Barkley has played in only 28 of the Giants’ last 49 games. Injuries have held Barkley back and the Giants need to plan ahead in case the injury bug strikes once again. Zack Moss could be a solid backup running back for the Giants.

Moss showed promise as a rookie in 2020, rushing for 481 yards with four touchdowns and a 4.3-yard-per-carry average. However, Zack Moss failed to build on his rookie season in year two. In 2021, the Bills’ running back position was a competition between Devin Singletary and Zack Moss. Unfortunately for Moss, Singletary was the better rusher. Zack Moss was underwhelming last season, prompting Buffalo to find his replacement in the draft. Moss rushed for just 345 yards on a 3.6-yard-per-carry average in 2021.

Zack Moss is a powerful running back that fights for ugly yards. He is also familiar with Brian Daboll’s offensive scheme and coaching philosophies, meaning he could make a quick transition to Big Blue. Moss also has the ability to contribute as a receiver out of the backfield. Check out the route running on this angle route to toast a linebacker:

Zack Moss on an angle route. Watch how he sells his man outside with body language & pace to give himself leverage & space inside when he breaks. Good reaction after the catch too to make the LB lose his feet#Bills #BillsMafia #GoBills pic.twitter.com/JY6LNcKf7r

Zack Moss has dealt with injuries in his career. His rookie season was cut short by a broken ankle. After an underwhelming sophomore season, Zack Moss’s stock is low. Now would be a good time for the Giants to trade for Zack Moss while his value is diminished, hoping he can contribute as a second running back alongside Saquon Barkley.