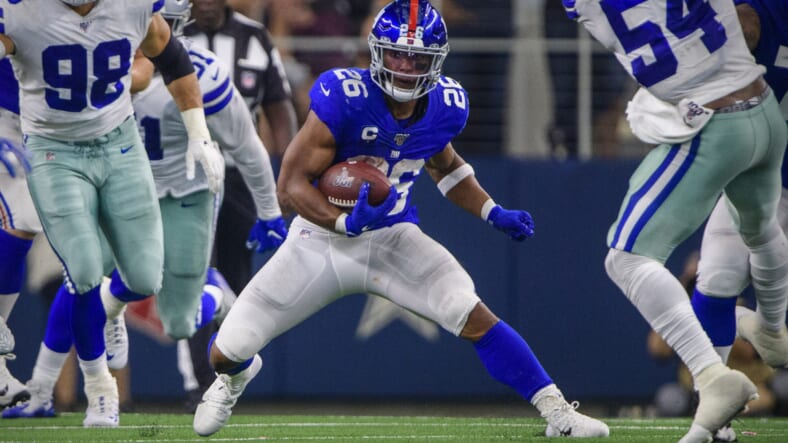 The New York Giants aren’t the most represented team on top player lists, although they have improved in that regard this year. That’s understandable since the team’s record in the past few years has been less than outstanding. The Giants have had some big individual performances go under the radar simply because the team’s record hasn’t been good enough to attract widespread attention to them.

However, one name that has come up repeatedly on these lists is Saquon Barkley. Despite not playing most of last season due to injury, Barkley has found his way onto a few top 100 lists at this point including the one from Pro Football Network.

Saquon Barkley might be the most physically gifted football player in the world. Nobody his size should be able to move as he can. The knee injury he sustained in Week 2 of the 2020 season affected his ranking going into 2021. I wouldnâ€™t expect the fourth-year player to be down this far on the list heading into 2022.

Barkley wasnâ€™t as big a part of the passing attack in 2019 as he was as a rookie, but offensive coordinator Jason Garrett loves using backs in the passing game. The young runner has insane big-play ability when in space. Using him as a pass catcher allows him a bit more freedom to use the vast creativity he possesses with the ball in his hands. If the Giants OL improves in 2021 and Barkleyâ€™s vision continues to progress, he could end up as a top-three running back in the league this season.

The addition of Barkley on this list over other Giants players such as James Bradberry, Blake Martinez, or Leonard Williams is surprising – he’s the only Giants player on the list, and it’s undeniable that others have done more for the team recently thanks to Barkley sitting out with an injury.

However, with Barkley’s higher name value around the league than these other players, it’s also not hard to see why he’s been favored in offseason articles like these compared to other players that mainly have a reputation with the Giants rather than nationally.

We’ll find out whether the ranking is deserved or not soon enough when the Giants take the field this season. We don’t know if Barkley will be available at the start, but given his importance to the Giants rushing attack, there will certainly be quite a lot of external pressure to play the entire year and justify the faith that the franchise and others have placed in him since his entry into the league.