Projecting the New York Giants’ starting defense for the 2020 season 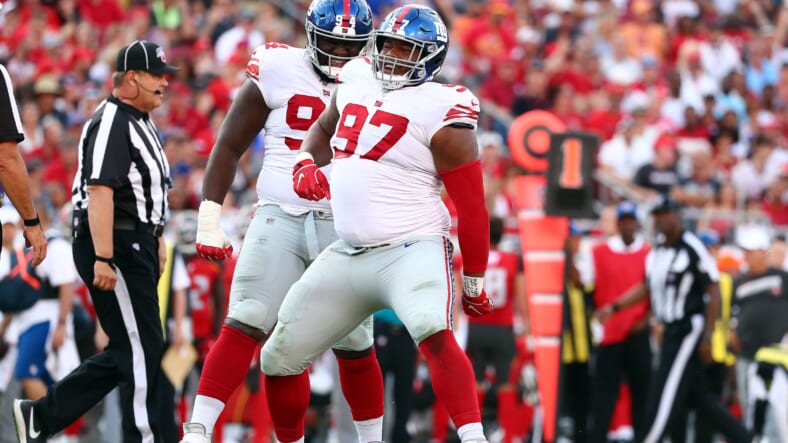 Taking a look at the New York Giants‘ potential starting defense for 2020:

Big Blue added numerous pieces to the defense this offseason, including free agent signings James Bradberry, Blake Martinez, and Kyler Fackrell. However, the allocations didn’t stop there, as GM Dave Gettleman and HC Joe Judge injected draft capital into the unit as well — Xavier McKinney is the most notable of the crop.

The starting unit should be improved from last year as the team ranked 30th, per NFL.com. Their 28.2 points per game allowed was atrocious and demanded more talent, despite featuring an incredibly young starting core. DeAndre Baker, Corey Ballentine, Ryan Connelly, Julian Love, and Oshane Ximines all started the year with the anticipation of earning significant snaps.

Here’s a look at what the starting defense could look like in 2020:

Williams signed his franchise tender a few days ago, guaranteeing at least $16 million in compensation. There’s still time for him to sign a multi-year deal, but for now, he will feature on the Giants’ interior defense. He’s a big run stuffer who draws double-teams, opening up opportunities for birders to leave their mark.

Tomlinson is one of the Giants’ more underrated players, stopping the run efficiently and even recording 3.5 sacks in 2019 (career-high). He’s a consistent starter on defense.

Big Dexy is going into his second year as a starter for Big Blue, and he showed immense potential last season as a rookie. He started all 16 games, earning 2.5 sacks and 38 combined tackles. His numbers don’t stand out, but he’s a big body who soaks up blockers in the trenches.

Ximines posted an impressive 4.5 sacks on 45% of defensive snaps last year as a rookie. The coaching staff sees him as a significant contributor, and his array of pass rush moves will boost him into a starting role. Expect him to have a productive year of the edge in 2020/

Fackrell posted 10.5 sacks in 2018 with Patrick Graham as his LB coach. If he can replicate that production again next season, the Giants’ pass rush might be a bit better than some expect.

Considering the Giants didn’t draft an inside linebacker in the higher rounds leads me to believe that they have confidence in Connelly. The former Wisconsin Badger tore his ACL in 2019 after starting his rookie campaign with flying colors. His two interceptions proved his ability in coverage, and his instincts plugging running lanes were impressive. If he can build off of those performances, he can be an effective ILB for the foreseeable future.

Martinez was an interesting signing given his lack of ability in coverage — he did details how he was playing a zone-scheme in Green Bay, which made his mistakes look worse than they actually were. What looked like man coverage wasn’t, essentially, leading us to believe he was poor in coverage. However, he’s a patient MLB who can soak up blockers and limit big run gains.

Bradberry is Janoris Jenkins’ replacement, and he should lock down top receivers for the duration of his contract. His ability to mirror wideouts and move into the slot promotes his diversity and effectiveness. He allowed just one touchdown last season, a significant decrease from the six he gave up in 2018. The Giants got a solid corner with more potential.

Baker struggled in 2019, but he has the tools to develop into a quality corner. His improvement later on in the season showed us the talent is there, he just needs to piece things together and play more press coverage. James Bettcher, her forced him into zone far too often when man coverage is his strength. I expect to see an improvement from the second-year corner.

Peppers was on pace for his best season in 2019 before suffering a hip injury on a kick return. He missed the remainder of the season after that and kept his stats to a minimum. However, he emerged as a real playmaker for the Giants, and his speed showed up all over the field. Paired with Xavier McKinney, the Giants could have a very talented safety duo to work with.

As one of the best tacklers in the draft, McKinney brings adaptability and toughness to the Giants’ defense. He can drop into deep coverage as a ball-hawk and also blitz as a safety. Patrick Graham is going to have a field day with Xavier, especially since he loves his safety blitzes.