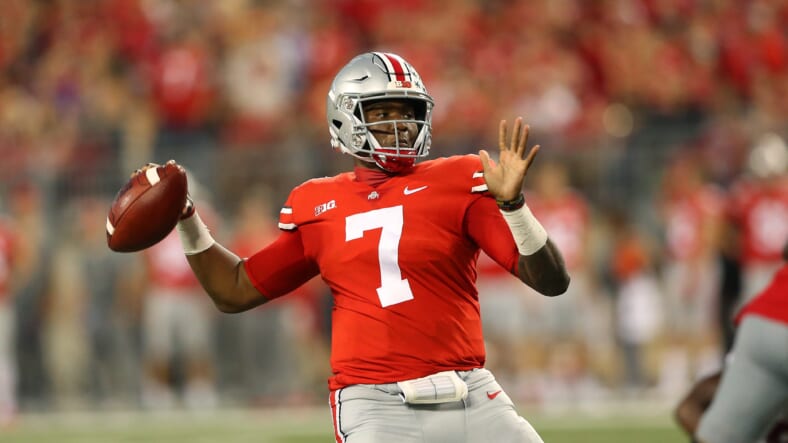 The New York Giants are looking to draft a quarterback in 2019, and at least one college star has shown interest in being that player. You’ve all probably heard of this player before, and if you’re a fan of a Big Ten team, you’ve definitely seen his highlights or maybe even watched him throw touchdowns against your team’s defense. This player, of course, is Dwayne Haskins Jr., Heisman Trophy finalist and the starter for an Ohio State team that will soon play in the Rose Bowl.

Haskins was one of the best quarterbacks anywhere this year, and despite only having one year as the full-time starter and potentially leaving college as a redshirt sophomore, his performances led his team to a Big Ten title and multiple victories over other highly ranked schools such as Penn State and rivals Michigan.

Recently, the quarterback has shown interest in being drafted by the Giants, and told the New York Post about it. “It would be pretty nice. I played â€˜Maddenâ€™ a lot, and he was really good running the football. The whole offense was nice. Plaxico, Jeremy Shockey, Eli, Ahmad Bradshaw. I was basically the stats guy from my family. I would know everybodyâ€™s height and weight, what college they went to.Â  Iâ€™ve been a Giants fan for a long time.”

Haskins has thrown for 4,580 yards this season, and still has one game left to play, the Rose Bowl against the Washington Huskies. The game will be played on New Year’s Day and afterwards, we might just find out whether or not Haskins will declare for the draft or return to school for his redshirt junior season. Despite his great arm and his good command of the offense in the second half of the season, Haskins only has one year as the team’s starter after serving as the backup to J.T. Barrett and only getting game time when the lead was secure.

With Oregon’s Justin Herbert and West Virginia’s Will Grier sitting above Haskins in most rankings for the 2019 quarterback class, it’s very possible that Haskins could still be around during the pick #10-15 range, which is where it looks like the Giants could draft after putting together a decent second half to the season that has featured four wins after only getting one from the first half.