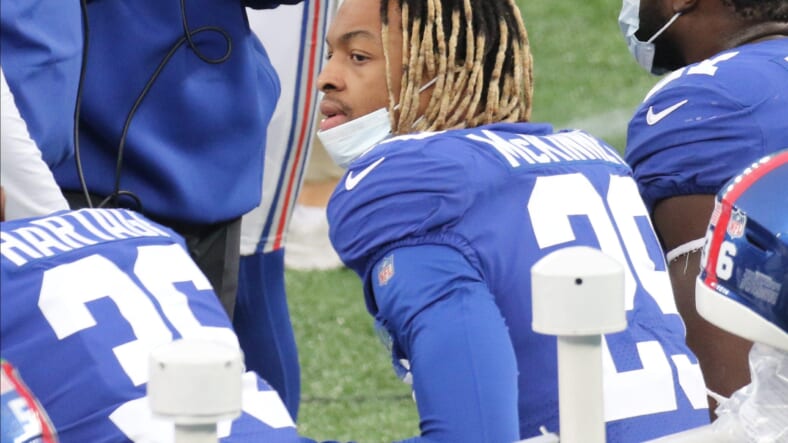 Two players stood out in particular when the New York Giants took their third win of the season. Xavier McKinney was likely the most disruptive player against the Raiders offense, coming away with two interceptions, and Quincy Roche forced the fumble that closed out the victory.

Both players have been recognized by Pro Football Focus for their efforts in week 9. McKinney was the top rated defensive player for the entire week based on PFF’s scores, and Roche had the sixth best pass rush grade.

Much of the praise for McKinney following the recent win is thanks to his pair of interceptions. Overall, McKinney finished the game with 7 tackles and two picks, returning one of them for a touchdown. In both categories, he matched his season highs.

This step up in production comes during a season where McKinney is seeing an increased usage in the defense. He’s played in every game so far, and has played every snap on defense in most of the games.

Quincy Roche, on the other hand, is more of a surprise story. Pittsburgh waived him on August 31, and Roche was picked up the next day by the Giants. However, he didn’t appear until week 3 and it took a few games for him to start getting playing time.

Against the Raiders, Roche put himself on the map with the sack and forced fumble that sealed the game. He played in 72% of the defensive snaps in that victory, showing his increasing role.

And during a season where injuries have been a problem from the start, players like McKinney and Roche stepping up seems exactly what the Giants need to stay competitive despite often relying on the “next man up.”