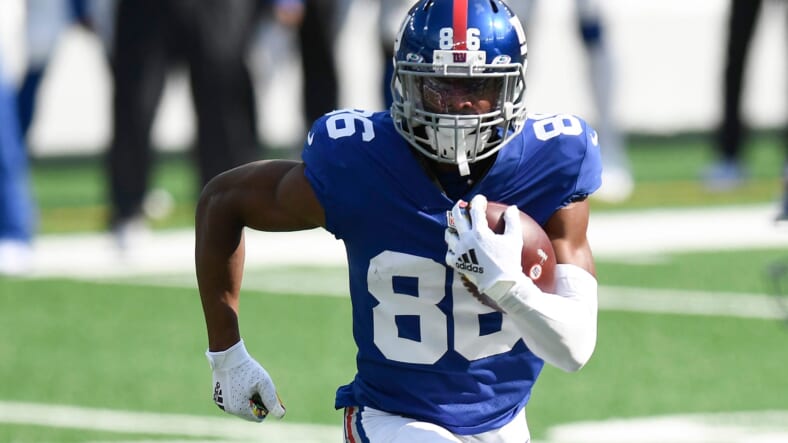 New York Giants wide receiver Darius Slayton (86) rushes in the first half against the Washington Football Team at MetLife Stadium on Sunday, Oct. 18, 2020, in East Rutherford. Nyg Vs Was

The New York Giants have to cut the roster down to 53 men by Tuesday at 4 PM, meaning several difficult decisions are about to unfold for general manager Joe Schoen and head coach Brian Daboll.

One of the more intriguing decisions is regarding wide receiver Darius Slayton, who hasn’t played in the last two preseason games after suffering a hamstring injury against the Patriots in Week 1.

Slayton needed these three games to justify his value and worth, especially since he’s being paid a lofty $2.5 million as a result of performance escalators.

However, following the Giants’ loss to the New York Jets in the final preseason game of the 2022 off-season, Slayton seemed noncommittal on his future with the team, indicating he could be released in the coming days.

Darius Slayton has underwhelmed for the New York Giants:

Last season with the Giants, Slayton finished with 339 receiving yards and two touchdowns well below his 740 yards and eight scores back in 2019 as a rookie. His catch-rate has fallen off significantly to 44.8% in 2021, his worst mark as a professional. One of Slayton’s biggest liabilities has been his drop rate, recording an 18.8% drop rate with six total drops last year.

The Giants simply can’t rely on him as a starter, given those issues and a limited route tree. It seems as if Daboll and new offensive coordinator Mike Kafka will introduce a system that manufactures production with short concepts and more creative play calling.

Darius is best utilized as a straight-line runner, but the Giants might rather give his snaps to Wan’Dale Robinson and Sterling Shepard upon his return. In addition, they could use the $2.5 million they would save from his salary at the cornerback position, a spot that has a severe lack of depth.