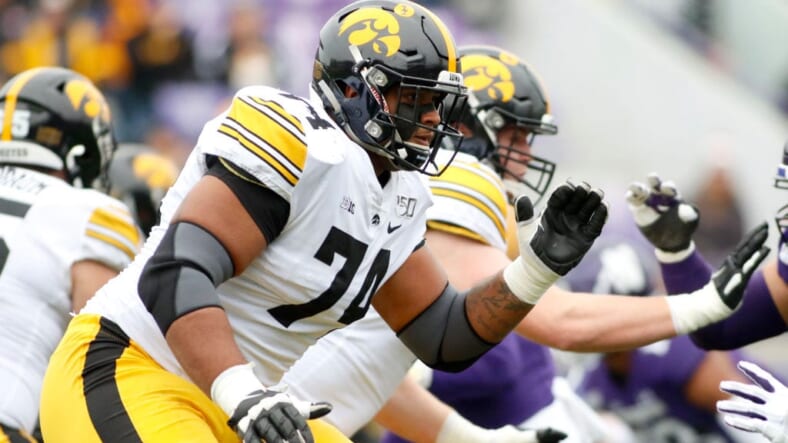 EVANSTON, ILLINOIS - OCTOBER 26: Tristan Wirfs #74 of the Iowa Hawkeyes in action in the game against the Northwestern Wildcats at Ryan Field on October 26, 2019 in Evanston, Illinois. (Photo by Justin Casterline/Getty Images)

The New York Giants didn’t have the worst draft in the world in 2020, but they could have done better. According to ESPN, they also would have taken a different player if it happened again. The player they took in reality was of course offensive tackle Andrew Thomas, but that pick has brought mixed results.

Thomas was quickly compared to a bust based on his early games, but was able to take steps forward with a change in coaching methods over the course of the season. Still, his performance will leave Giants fans looking for a big step forward next season.

ESPN believes if the Giants were to draft again, they would skip the uncertainty and select Tristan Wirfs. Wirfs ended up being picked lower than the other top tackles in the draft, but is on the All-Rookie team and is set to play in the Super Bowl with Tom Brady and the Bucs.

It came down to Thomas and Wirfs for the Giants in the real draft. They were atop their board at this position of need. Itâ€™s hard after their rookie years not to lean toward Wirfs. He played at an All-Pro level while Thomas allowed the most pressures in the NFL. It was tough to pass on Justin Jefferson in this exercise, but Wirfs was equally impressive at a more premium position. â€” Jordan Raanan

Things aren’t all that bad for the Giants. Based on the improvements Thomas has made compared to his earliest games, it looks like the Giants managed to avoid ending up with another Ereck Flowers. But they do have a player on their hands that has some more ways to go before reaching his full potential.

Hopefully, for the sake of Daniel Jones, that step forward does come this season.