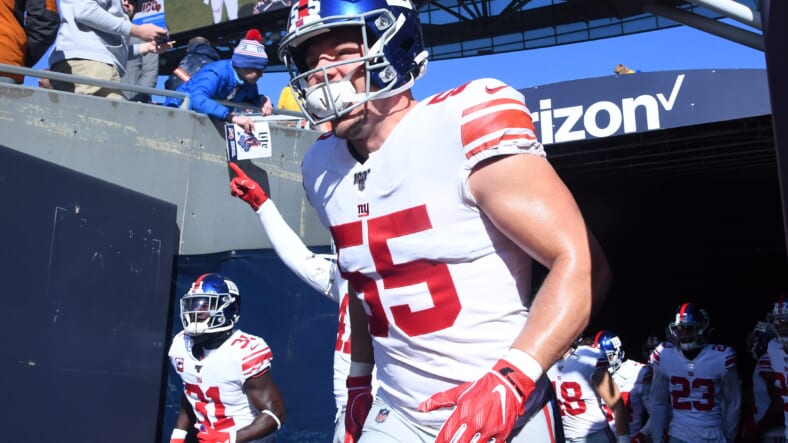 The New York Giants have signed linebacker David Mayo to a three-year contract extension (according to Dan Duggan of The Athletic). This Friday the thirteenth ended up being David’s lucky day. The Giants made the right decision and extended David Mayo on a team-friendly contract.

Mayo’s three-year contract extension is worth $8.4 million, according to Ian Rappoport. The former Carolina Panther is receiving a hefty pay increase while the Giants are retaining a consistent contributor in run defense. Mayo’s reliable performance in 2019 makes this deal a bargain for New York’s team.

David Mayo started 13 games in 2019 despite being considered a reserve heading into the season. In those 13 games, though, Mayo exceeded all expectations. David’s consistent performance in run-defense throughout the season earned him his new contract.

Pro Football Focus was a big fan of David Mayo in 2019. Mayo earned PFF’s second-highest run-defense grade by an inside linebacker this season. Mayo did struggle in pass-coverage, but his play against the run was consistent and makes him with valuable heading into 2020.

In 2019, David Mayo totaled 82 combined tackles in 13 games. Additionally, Mayo had 5 tackles for loss and 2 sacks. But Mayo’s poor coverage stats will likely keep him from being the Giants’ primary inside linebacker next season. Mayo’s coverage was targeted 29 times and he allowed 19 completions, a 65.5% completion percentage. This is an area where David will need to improve in 2020 if he wants to see his role continue to expand on the Giants’ defense.