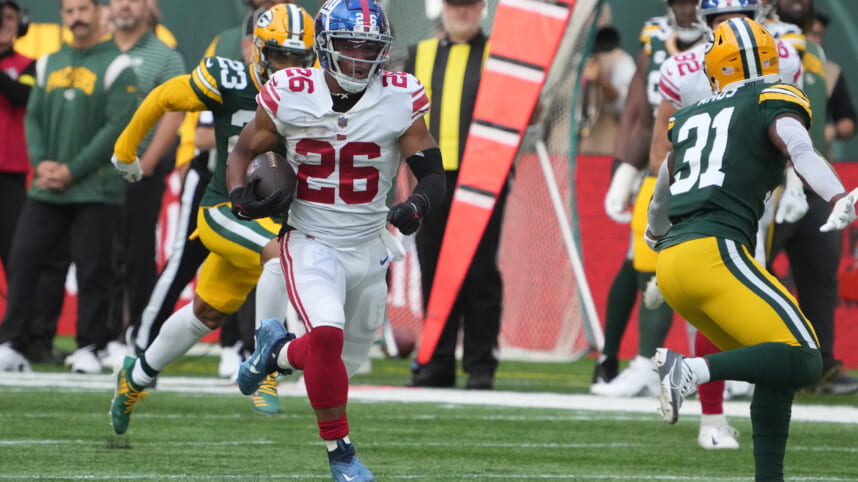 The New York Giants have improved their record to 4-1 after a thrilling matchup with the Green Bay Packers in London. Despite a mountain of injuries, the Giants came back to beat Green Bay 27-22 after a go-ahead rushing touchdown by Saquon Barkley late in the fourth quarter. The New York Giants’ 4-1 start is the best start the team has had since the 2009 season when Big Blue started 5-0.

Main takeaways from Giants vs Packers

With the cards stacked against him, quarterback Daniel Jones put together one of the best performances of his career. He completed 21 of his 27 attempts for 217 yards. The highlight moment of the game was a 91-yard scoring drive that Daniel Jones crafted to tie the game at 20 in the fourth quarter. The Giants’ following possession resulted in a Saquon Barkley touchdown to give the Giants a late lead.

Though Jones didn’t fill up the stat sheet, he came up clutch in the game’s biggest moments, converting first downs and moving the ball downfield to put his team in scoring position. Saquon Barkley played a heroic game. The Giants’ superstar left the game with a shoulder injury but returned to lead his team to victory. Saquon took 13 handoffs for 70 yards and one touchdown along with three receptions for 36 yards. The other touchdowns on the day were scored also scored on the ground, one by Gary Brightwell and the other by rookie tight end Daniel Bellinger.

The New York Giants’ leading receiver in the contest was Darius Slayton. Big Play Slay returned to the Giants’ starting lineup to haul in six receptions for 79 yards and a couple of clutch first-down conversions.

Wink Martindale and the Giants’ defense held the Green Bay Packers to 301 yards of offense. Julian Love led the team with seven total tackles. It was another dominant performance by defensive lineman Dexter Lawrence as he totaled five tackles including one sack and a tackle for loss.

The Giant will be back at home in New Jersey next week to host the formidable Baltimore Ravens. New York has all the momentum in the world right now after an exciting 4-1 start to the season. Big Blue will look to improve their record to 5-1 next week and continue to establish themselves as one of the top teams in the NFL this season.